Muscle cars are back! Ford's retro-look, big-power Mustang has plugged that long-vacant space in US buyers' hearts - and now Chevrolet wants a piece of the action, too. 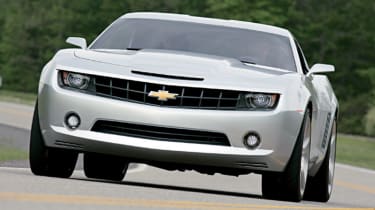 The Camaro concept looks and sounds great, and is ready for a re-run of the Sixties muscle car wars. On the basis of this early test, it drives well, too. Fast car enthusiasts within GM want to build it, and it could even come to Europe. Now, they just have to make the business case for it - the result of which we'll know by the end of the year. We hope it's a resounding 'yes'.

Muscle cars are back! Ford's retro-look, big-power Mustang has plugged that long-vacant space in US buyers' hearts - and now Chevrolet wants a piece of the action, too.

It took the wraps off the Camaro con-cept at January's Detroit Motor Show, and five months later, while General Motors does the sums for a production version, Auto Express has driven it first.

Away from the stands, the Camaro looks bigger, edgier and more menacing than ever. Design supremo Ed Welburn - himself the owner of a 1969 Camaro - had two design teams working on the styling. One car was just too retro, but the other is what you see here.

It's broad, bad and bulging, the rear wings extended to cover giant 22-inch rims and unique 305/30-section Goodyear tyres. The fronts are mere 275/30s on 21-inch wheels! Vast aluminium tail-pipes hint at what's to come, and there's more aluminium under the bonnet, with polished rocker covers for the Corvette-sourced 400bhp, 6.0-litre V8. Inside, yet more aluminium surrounds the dials and gearlever. The speedo and rev counter are set in Sixties-style pods, the blade-like column stalks are similarly retro and what resemble gold-anodised aluminium trim panels are actually acrylic. The standard of finish is fabulous, especially the way the heavy glassfibre outer panels fit together with laser-like precision.

Unlike most sports cars, the seating position is high; project leader Gretchen Darbyshire says the idea was to make the seats look as if they are floating. But the result is a letterbox-style view out through the shallow windscreen.

The V8 fires with a violent rumble. Into the first of the six forward ratios, up with the smooth clutch and we're off, the engine crackling angrily. It sounds terrific. "We worked hard on that," ex-plains Darbyshire, "but we might have issues with drive-by noise legislation."

Her role was to bring together all the pieces to make the concept work: the Corvette engine, the Cadillac CTS rear suspension, the front suspension from a pre-production car. Which one? Well, it's tipped to be GM's new Global Rear-Wheel Drive platform. Developed mainly in Australia by Holden, but with input from engineers worldwide, this is most likely to underpin a production Camaro.

We can't push too hard, as it's a concept and has an electronic speed limiter - but unleashing most of the 400bhp in second gear, we're definitely going quicker than we're supposed to! Each gearchange brings a fluff and a crackle, and there's enough power and pace to push the car through some corners - it's taut, hardly leans and steers sharply.

With a chassis that promises to be far more sophisticated than the Mustang's, menacing looks and that big V8, a production version would really be something that lived up to the Camaro name.