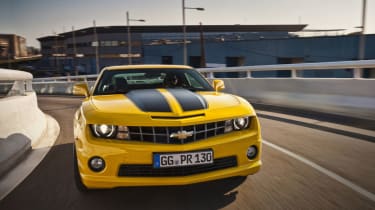 The revised UK-specification Chevrolet Camaro offers exactly what you’d expect from an American muscle car, with stunning looks, brutal power, addictive straight-line speed and a NASCAR-style soundtrack. But it’s also a car that demands a lot of sacrifices from its owner. While the driving experience has been improved over the US version it’s still unsophisticated, the interior feels cheap and the Camaro would be a struggle to live with every day. If you can handle that and the fuel bills, though, head to your nearest Chevrolet dealer next year.

The Chevrolet Camaro arrives in UK dealerships March next year, giving British buyers a taste of American V8 muscle for only £35,000. It will still be left-hand drive, but it now gets steering and suspension tuned specifically for our roads, while the styling has been updated too. We took a test drive to see how it’s shaping up.
The wedge-shaped front end - with its squared off, deeply recessed headlights and purposeful bonnet bulge – is as striking as ever, while at the back the UK version gets a set of LED tail-lights that mirror the lights up front, and some chrome exhausts similar to those seen on the Corvette Z06.
The 426bhp 6.2-litre V8 is also derived from the Corvette, and drives the rear wheels via a six-speed manual gearbox. The huge engine dominates the driving experience – it rumbles on start-up, and its enormous 569Nm of torque means the the straight-line performance certainly lives up to its menacing looks.
If you go for the automatic version, you get a a clever fuel management system that shuts down half of the cylinders under light loads which helps to improve fuel economy, but this manual version returns just 20mpg if you are lucky, and emits 329g/km of CO2.
On the move, the Camaro’s clutch is heavy and the gearshift clunky, while the steering lacks feedback, despite Chevy updating it for the UK.
However, the handling is a big improvement over the US model. Engineers tested the Camaro at the Nurburgring in Germany, and changes include a new front axle, new dampers, bushes, and anti-roll bars to increase stiffness and high-speed stability. The ride is better too – it’s still firm but it’s much more stable than before. There’s plenty of grip too.
In the UK the Camaro will only be available in flagship SS trim, which comes with 20-inch wheels, a full leather interior and premium stereo. And with a price tag of £34,995, you’re getting BMW M3 performance for £20,000 less.
Predictably, there are areas where the cheapness shows. The steering wheel is the same as on any other Chevrolet model and while a head up display and ambient cabin lighting go some way towards making up for the cheap feeling plastics, the Camaro’s interior lets the side down.
The 320-litre boot is reasonable, but the tight back seats are more for occasional use, thanks to the low roofline and space taken up by the front seats. Rear visibility is poor as well, which might make it tricky to drive on narrow British roads
Share this on TwitterShare this on FacebookEmail