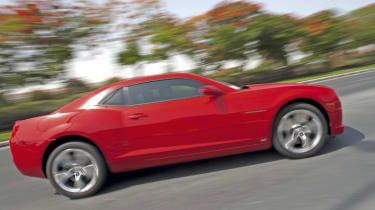 The Camaro is a welcome return for a motoring legend, with a look and feel that’s unlikely not to raise a smile from the majority of motoring enthusiasts. It’s a big, mean-looking car with a serious soundtrack, but as it stands, its bark is worse than its bite. Worked hard it can be suitably fast, but it’s hampered by some unfortunate gear ratios and a chassis that doesn’t feel as polished as any of its European rivals. Whether a right-hand-drive version appears later on will also be key to its success in the UK.

Times are tough at General Motors at the moment, but you wouldn’t know it from looking at the brutish new Chevrolet Camaro.

It resurrects one of the US car industry’s most famous badges. And the best news of all is that British enthusiasts will soon have the chance to experience the 6.2-litre V8 muscle car for themselves!

The all-new 2+2 coupé draws inspiration from the 1969 model, which is revered by enthusiasts. But where rivals shamelessly plunder their back catalogues, Chevrolet has fused famous Camaro trademarks, such as the aggressive nose and pronounced rear wheelarches, with modern details. Sharp edges bisect soft curves, and Chevrolet claims these design cues were inspired by the F22 fighter jet.

The body was penned in the US, but most of the engineering work was carried out in Australia using the same GM platform that underpins Vauxhall’s VXR8. That’s a promising base for the Camaro, as unlike some of its reborn muscle car contemporaries – and the Sixties original – the new model has a sophisticated multilink independent rear suspension set-up.

There is a V6 version available, but we tested the top-spec SS model, which is powered by the vocal 6.2-litre V8 also found under the bonnet of the latest Corvette. That means a thundering 426bhp, which gets to the rear wheels via a tough six-speed manual gearbox, and means the Camaro sprints from 0-62mph in 4.7 seconds.

Inside, the cabin echoes the styling of the exterior, so there are elements of the Sixties original, reinterpreted with a modern treatment. The dashboard has a high cowl and deep facia, with the main instruments in separate pods and four minor gauges set low behind the gearlever, just like the original.

So, despite the obvious use of some cheap and hard plastics, the Camaro’s cockpit tries hard to be different. In practice, it’s not quite so successful – the oversized steering wheel isn’t easy to use and the optional sunroof robs headroom from taller drivers.

Fire up the V8, and it produces a suitably deep throb from the exhaust and a deliciously wicked crackle on the overrun. Yet somehow, the Camaro doesn’t feel as quick as the figures suggest. This is due to the fact that it weighs a hefty 1,746kg, and the engine needs to be revved to give its best.

For economy and emissions reasons, the Camaro is saddled with long gear ratios – second takes you to nearly 100mph and sixth means just 1,500rpm at the motorway speed limit. Consequently, you have to work the Camaro hard to get the best out of it, and it often feels sluggish.

Our test route was fast and smooth with few corners, but initial impressions were slightly disappointing. There’s plenty of grip from the big tyres, but the suspension is surprisingly soft, allowing a lot of body roll. Light and sometimes vague steering further spoils the driving experience, so the Camaro isn’t as entertaining as we’d first hoped.

It will be amazing value when it goes on sale in the US, though, and there’s no denying it’s a potent reincarnation of the original muscle car. How much of a success it becomes in the UK will depend on whether GM finds a budget to build a right-hand drive production version (the design for which is finished).

It will also need a careful eye on pricing to maintain value for money, and a look at optimising some of the mechanical elements for more complex UK roads.

Rival: Vauxhall VXR8 The big Vauxhall shares the same engine and platform with the Camaro, but offers a significantly different experience. It’s far more practical, offering a hugely spacious interior and an enormous boot, although like its US relation, fuel consumption can be very heavy if you use all of the performance. It does handle better than the Camaro, though, as its chassis is more suited to UK roads.