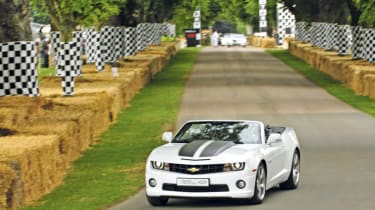 The reborn Camaro is a huge success in the States, with more than 200,000  sold. But Chevrolet is under no illusions, and expects the Convertible and Coupé to sell in very small numbers in the UK. It’s unsophisticated compared to European rivals, and the cabin doesn’t exude the same kind of quality, but it does have a charm that few models on the road can match.

Muscle car fans, rejoice. Chevrolet is set to introduce the Camaro to the UK in 2012, and we had the chance to drive the new Convertible version at the Goodwood Festival of Speed.
With its bold face, bulging bonnet and chunky stance, the US legend looks like nothing else on the roads – and this soft-top model has lost none of the visual appeal of the hard-top, either.
With the roof down, you get a better view of your surroundings, and you’re also rewarded with a muted roar from the V8 under the bonnet. With the roof up, limited headroom means the cabin can feel a little cramped, but the rear can carry adults in relative comfort.

All Camaros destined for UK roads are top-spec SS models, which means power comes from a 6.2-litre V8 with 426bhp. Standard equipment includes full leather upholstery, rear parking sensors and 20-inch alloys.
As well as the generous equipment list, the cabin sports a stylish design, with the main instruments in separate pods and four minor gauges set low behind the gearlever, as in the original Camaro. The downside is some cheap and hard plastics, which aren’t up to scratch compared with rival European offerings.
Straight-line performance from the huge engine is blistering, but  our car was equipped with a six-speed automatic gearbox that can struggle to keep up. The sprint from 0-62mph takes only 4.9 seconds, but changes made using the steering wheel-mounted paddles seem to take an age. However, the shifts are smooth enough during everyday motoring, and 569Nm of torque makes for relaxing progress.
Even so, we’d still recommend avoiding the auto – a £1,500 extra – to stick with the six-speed manual that comes as standard.
Through corners, there’s plenty of grip from the large tyres, but the suspension feels a little wallowy, which makes for a surprising amount of body roll. The steering wheel is an awkward shape, too – couple that with a light and slightly inaccurate action, and the driving experience could be a lot better.
Chevrolet has fine-tuned the suspension for European roads, but we still found the ride a little harsh – although that could be down to the large 20-inch alloys.
Prices for the Convertible start at £39,995, but Chevrolet will only bring LHD models to the UK.
Share this on TwitterShare this on FacebookEmail