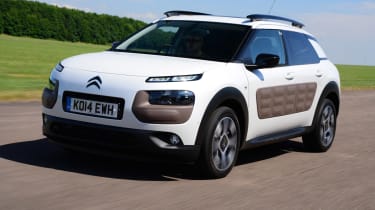 The Citroen C4 Cactus sees the French manufacturer take a back-to-basics approach - a car that's quirky, affordable and different, much like those that Citroen used to be famous for.

The company was determined to create something that broke the mould, rather than build yet another competitor for the Volkswagen Golf or Nissan Qashqai and so address the needs of today's drivers by taking radical steps in both design and innovation. 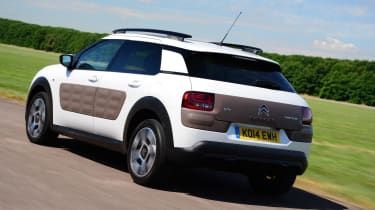 Unlike most production cars, the Cactus looks very similar to the concept version we first saw in 2013, right down to the floating roof, split front lights and protective side panels. One of the most striking features on the car are these AirBumps, which also appear on the car's front and rear bumpers.

The air-filled plastic bumps are designed to act like bubble wrap and so help prevent damage caused by low-speed collisions. Buyers will be able to choose between ten different exterior colours, with four hues for the Airbump panels and three interior themes.

The Citroen C4 Cactus is now on sale in the UK and will cost from £12,990 for the entry-level 74bhp PureTech petrol model in Touch trim, rising to £13,390 for the equivalent 81bhp variant, with the most basic diesel model setting you back £15,390. In this guise the C4 Cactus gets a seven-inch touch screen, LED daytime running lights, DAB digital radio and cruise control.

The range expands for mid-spec Feel (£14,590 - £16,790): the less powerful petrol engine makes way for a 109bhp unit, the range-topping 91bhp e-HDi diesel becomes available, and there’s the option of an automated manual transmission for some units. You’ll also get extra standard kit in the form of air con, front sunvisors, Bluetooth, and styling tweaks in the form of body-coloured door handles, gloss black detailing and a leather-trim steering wheel. 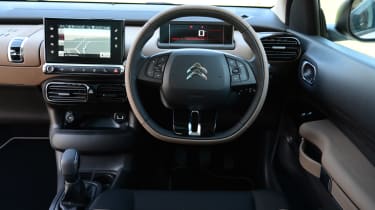 This engine line-up carries over for top-of-the-range Flair spec (£15,990 - £18,190), which sees prices rise £1,400 for each variant. For this you’ll get heated door mirrors, an Auto Pack for the lights, wipers and air con, plus reversing sensors and camera, tinted rear windows and front fog lights with cornering function – all of which are optional extras on Feel variants.

Citroen has confirmed the C4 Cactus will arrive on our shores this October.

The Cactus is set to be a template for all the ‘C-line’ models in the future. The ‘DS’ sub-brand will continue, but cars from the standard range will all feature the same striking design, simplified interiors and clever technology as the Cactus.

At a special preview event held in Paris, designer Mark Lloyd told Auto Express: “People have moved on in the way that they use products, but the car industry is very traditional, and has not moved at the same pace of change as consumers.”

For the Cactus, that means offering C-segment styling and space with B-segment running costs. Thanks to clever packaging and extensive use of lightweight materials – like for the bonnet – the Cactus is a huge 200kgs lighter than a standard C4. 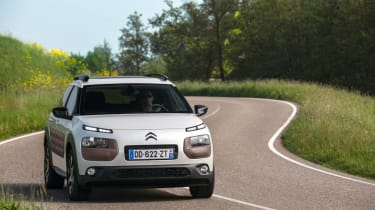 The newcomer shares the same 2.6m wheelbase as the C4, but it’s actually based on the smaller chassis that underpins the DS3. The roof rails and chunky body give it a big car look, but the Cactus is shorter than hatchbacks like the VW Golf.

With a 358-litre boot and decent rear legroom, it also boasts better practicality than compact crossovers like the Nissan Juke and Renault Captur - both of which Citroen sees as key rivals for the Cactus. To save weight the rear windows pop-out rather than winding down, and there is no split/fold action for the rear bench.

Four engines will be available at the UK launch in October. The first are a pair of three-cylinder petrol engines, one turbocharged and naturally-aspirated, making 81bhp and 109bhp respectively. The diesel models both have a 1.6-litre capacity, and both meet the strict Euro 6 emissions regulations, with 91 and 99bhp each.

The entry-level petrol tips the scales at just 965kgs – almost 300kgs less than rivals like the Nissan Juke and Fiat 500L and as a result the cleanest diesel model will emit just 82g/km while returning an amazing 91.1mpg.

The Cactus is just as cutting-edge inside too, with a number of innovative touches that are designed to make it comfier and easier to live with than a normal hatch. Two digital displays have replaced the traditional dials and dash buttons, with a seven-inch touchscreen in the centre console controlling all major functions. The infotainment system features several apps including live traffic updates and auto versions get a set of three buttons instead of a conventional gear selector. This six-speed gearbox is an updated version of the ‘ETG’ semi-automatic gearbox.

Citroen says it has improved the throttle response and changing times of this gearbox, and also made it less susceptible to creeping in traffic and at low speed but manual versions are predicted to make up the majority of Cactus sales. 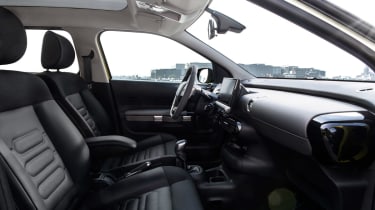 On higher spec models a full-length glass roof will be optionally available, which uses the same glass technology as high-end sunglasses to block UV radiation and control the temperature in the cabin and remove the need for a heavy blind. The passenger airbag has also been built into the roof, which means the dash can be mounted further down the cabin to provide a greater feeling of space inside.

Citroen is planning on giving people a new way to pay for their Cactus too. Buyers will be able to choose a monthly price plan similar to a mobile phone contract, with insurance, finance and other costs rolled into a single monthly payment or even choose to pay per mile covered – although at this stage they were not clear on the details of how this kind of scheme would work in the UK.

See where the Citroen C4 Cactus comes in our list of the best crossovers on sale. 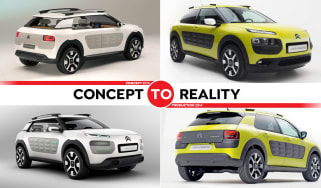