With a range of 106 miles, is the electric version of Citroen's Berlingo van a worthy alternative to the frugal diesels? 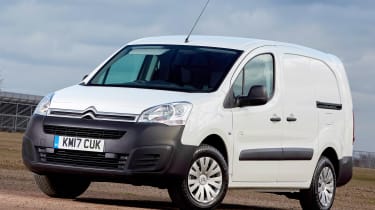 Electric vans have never really caught on in this country and it’s easy to see why. With the significantly higher purchase price combined with the limited range, the negative aspects can outweigh the positive. The Citroen Berlingo Electric van is a prime example of the above. It hasn’t moved the electric van game on and it’s hard to recommend it over its extremely frugal diesel equivalent. It’s pleasant enough from behind the wheel, however, with decent acceleration and a relaxed driving experience. For those who can operate within the limitations of its range and are able to charge it every day, it’s still an interesting proposition that might just work.

Despite the recent boom in electric cars, electric vans are yet to really catch on in the UK. Citroen is one of only four brands – the others being sister company Peugeot, as well as Nissan and Renault – that currently build electric LCVs in any volume, but it’s forecasting significant growth in the area.

In a bid to improve its foothold in the sector, Citroen has refreshed its Berlingo electric van range, updating the existing L1 model and introducing the larger L2. The main thing to note is that the move to electric power hasn’t compromised the load space that the Berlingo offers. Due to the Lithium-ion battery packs being fitted beneath the load floor, the electric versions have identical load dimensions as the equivalent diesel models. 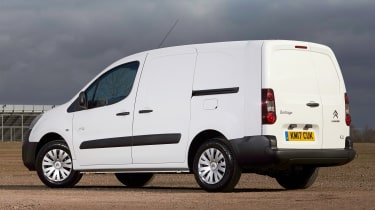 The regular Berlingo van range comes in a variety of trim levels, from X to top-spec Enterprise, however the electric version is only offered in mid-range LX guise. This costs £22,022 after the Government’s plug-in van grant (PiVG) has been applied, which appears costly when compared to the £17,125 purchase price for the Renault Kangoo Z.E and the £17,256 for the Nissan e-NV200.

Unlike its rivals though, the battery packs in the Berlingo are sold along with the van (Renault and Nissan lease you the batteries). This explains the higher purchase price, and for extra peace of mind, the batteries do come with a comprehensive 8-year/60,000-mile warranty.

Citroen states that the Berlingo Electric has a range 106 miles, which is on a par with both the Kangoo Z.E and e-NV200. The batteries can be charged up to 80 per cent in just over 30 minutes with DC rapid charging. Alternatively, they can be boosted up to 100 per cent in 8 to 10 hours via normal AC power. 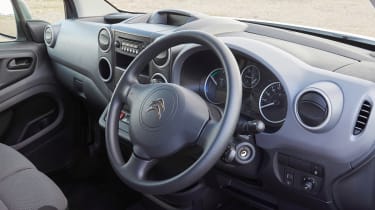 Inside the cabin, the benefits of going electric can instantly be seen with the extra legroom afforded by the lack of a transmission tunnel. There’s also space for three people up front thanks to the dual-passenger seats on offer - something that’s unique in this class, even if room for the middle passenger is a little tight. Air-conditioning has been added as standard, along with remote central locking and electric windows. The useful rear parking sensors are an option though, along with other luxuries such as Bluetooth and a DAB radio.

Both the L1 and L2 variants are powered by the same 49kW electric drivetrain, which develops 66bhp and 200Nm of torque. Driving the Berlingo Electric couldn’t really be easier. Simply turn the key in the ignition, switch the automatic gearbox into drive, release the handbrake and off you go.

Push your foot on the accelerator and the van will move off in a sprightly fashion with the instant torque pulling it smoothly away from standstill. Although it’s not going to worry a Tesla, the power is sufficient for a van this size and it’s a pleasant – if a somewhat uninspiring - experience. As with most electric vehicles, once you’re up to speed, the power starts to trail off and overtaking becomes more difficult.

However, the Berlingo is likely to spend most of its life in cities and it copes well when navigating through traffic and around tighter bends. It’s not going to get your pulse racing at any point, but it will get you from A to B with the minimum amount of fuss. The lack of noticeable engine noise does seem to amplify all the other sounds in and around the cab and when fully loaded the creaks and rattles coming from the load bay will be even more apparent.

The stated range of 106 miles will depend on your driving style and a multitude of other factors, including the use of air-conditioning. On our initial 26-mile test route the van only used an impressive 18 miles of range, however a total real world range of around 80 miles for a full charge is to be expected. 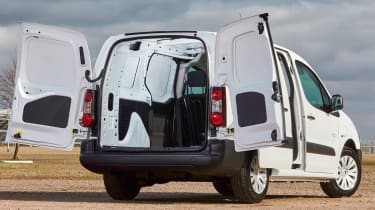 In conclusion, a couple of questions remain. Is the limited range going to be enough to persuade businesses to make the switch from conventionally powered vans? And are the reduced running costs enough to cover the hit of the higher purchase price? Both will depend on how much you plan use the van, and where.

The Berlingo Electric is a more attractive proposition if you drive regularly in London, as electric vans are congestion charge exempt. Savings of £10.50 per day will quickly add up if you use the van in the capital five times a week, plus certain boroughs also offer free EV parking. Additionally, electric vans are exempt from Vehicle Excise Duty (VED), bringing a further saving of £230 per year.