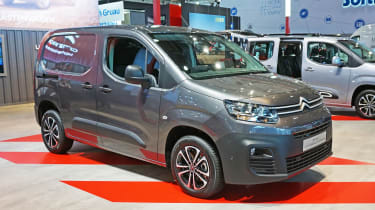 Prices and specifications have been revealed for the new Citroen Berlingo van, which is now on sale in Britain.

The Berlingo Van - sister model to the Berlingo people carrier - is based on a variation on the PSA Group's EMP2 platform that is also used by the C4 SpaceTourer, which means Citroen has been able to equip it with the latest safety features, such as automatic emergency braking, lane assist and adaptive cruise control, among others.

It starts from £15,825 before VAT for the basic X badged van, and its pricing structure and equipment levels mirror those of its sister van, the new Peugeot Partner.

That means there's a plusher trim called Enterprise from £17,425, a tougher van with hill descent control and grip control called Worker priced from £17,075, and a van equipped with creature comforts for long distance deliveries called Driver is priced from £19,970. All can be had in long-wheelbase format for a £1,975 premium.

On the outside, while the Citroen Berlingo Van focuses on function over form, its design is clearly inspired by recent additions to the Citroen car range, such as the C3 and C3 Aircross. It gets the same high-set Citroen badge and daytime running lights as the MPV, although there's more durable black plastic on show and steel wheels - alloys will feature on higher spec vans.

Under the skin, the Berlingo Van uses a platform that features EMP2 technology up front and a development of the outgoing Berlingo's van platform at the rear. This means that the Berlingo Van has a load volume and payload that's similar to the outgoing model, yet it will feature Citroen's latest safety technology and driving aids. This includes adaptive cruise control with the auto gearbox-equipped models, optional traffic sign recognition, a rear surround camera system and active braking. In addition, the Berlingo Van will be offered with an overload indicator, which will warn drivers if their payload exceeds the maximum allowed in the back of the van.

Buyers will be able to specify one, two or no sliding side doors, while a 60:40 split rear doors will be standard. These and a steel bulkhead will be standard, with Citroen offering the option of glass windows and a top-hinged tailgate. There will also be an optional roof flap available for owners that need to carry extra-long items that won't quite fit in the load area. 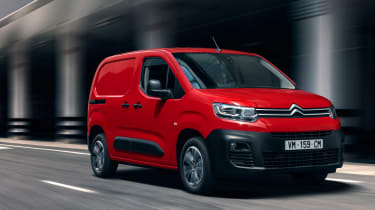 In the cab, there's the option of three-abreast seating – made possible by the fact the gearlever is now mounted high on the dashboard, which frees up foot space lower down. This seat can be lowered to create a table if necessary, while the dashboard is carried over from the MPV version. That means clear dials and an eight-inch touchscreen is offered on higher spec vans. And if you need to carry more passengers, there's a crew van variant on offer which has the same rear bench as the Berlingo MPV, but with a slightly more utilitarian finish.

Power comes from Citroen's most recent 1.2 PureTech three-cylinder turbo petrol in 110 and 130 forms and the latest 1.5 BlueHDi diesel in 75, 100 and 130 guises. The most powerful petrols and diesels come with Citroen's EAT8 eight-speed auto gearbox.

Prices and full specifications of the new Berlingo Van will be revealed closer to its on-sale date towards the end of the year.

Take a look at the best small vans on sale here.