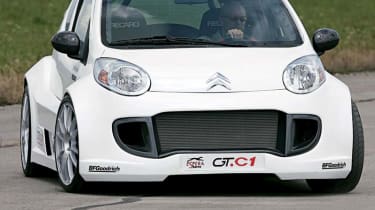 This has to be the ultimate pocket rocket. With the C1 GT, Citroen has managed to bring the boy racer out of one of the mildest mannered motors on the road. The engine sounds great, the steering is superbly direct and the brakes offer simply incredible stopping power. It’s highly unlikely that the firm will ever put the GT into mainstream production – but there are few hatchbacks on the planet that are quite so distinctive.

If the Pluriel is a latte, the C1 GT is a double espresso! While Citroen’s standard C1 is a cheap and cheerful city runabout, it has now morphed into something more like a supercar.

The wild GT was penned by Swiss-based Italian designer Franco Sbarro. Under the bonnet, the coachbuilder has slotted in the C2 VTR’s 1.6-litre petrol engine. Then, the standard C1 was cloaked with outrageous bulging bodywork, making the hatchback look as if it has overdosed on steroids.

However, the changes are more than just cosmetic, with a huge air intake at the front used to extract maximum pace from the 125bhp engine. Traditional doors have been replaced by gullwings, while the sill has been raised to ensure the GT remains as stiff as possible.

Add in lowered Recaro sports seats and you need to be as flexible as a gymnast to get in gracefully. But once you’re behind the red Alcantara and leather-covered steering wheel, it’s well worth the effort. The driving position benefits from being so low, and while the steering is heavy at city speeds, having a weightier engine over the front wheels makes it feel wonderfully direct above 35mph.

That motor adds plenty of performance, too. The C1 GT tips the scales at a relatively light 900kg, while Sbarro claims it has achieved 130mph in this machine – and it was still accelerating.

Just as well the brakes are derived from the World Rally Xsara’s. But while they scrub off speed superbly, their on-off nature takes getting used to. So does the sound of the centrally mounted exhausts – and the admiring looks from passers-by.