Supermini-MPV has caused a family feud with its optional panoramic roof! 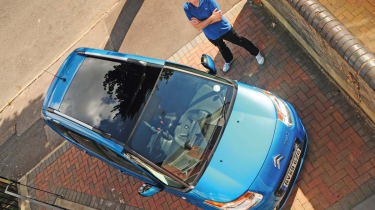 Families mean family cars. That’s what I was told when my daughter arrived last year, followed in quick succession by the C3 Picasso.

But families also mean arguments – or at least disagreements, as 11-month-old Isla can’t actually speak yet! – and the Citroen has been at the centre of one of them.

Since Isla had her new forward-facing Maxi-Cosi Axiss seat fitted, she’s loved staring up and out of the £535 optional panoramic roof at the clouds and the sky. I’m less of a fan, though, as the set-up leaves the cabin feeling too exposed for my liking. Plus, its flimsy cover persistently comes off its runners. Yet any attempts to shut off this natural light are met with the sort of wail that would stop any self-respecting dad dead in his tracks.

While the roof has split opinion, there’s an array of other clever family-friendly features which have proven their worth during our nine months with the car. From endless cubbies to flip-up tables on the back of the front seats and standard rear sun shades, the Citroen is a cleverly kitted-out vehicle.

Its versatility has also impressed. When the child seat is not in place, it’s an easy job to fold down the rear bench and create a vast 1,506-litre load space. I’ve used this to transport tables, a garden swing and a barbecue, and it’s this flexibility I’ll miss most when the C3 Picasso goes back to Citroen later this month.

Running it has been like having both a family car and a small van on tap at the same time, which has been a boon given the amount of time I’ve spent clearing stuff out of our new house.The engine gets a thumbs-up, too. This 1.6-litre diesel is no hi-tech trailblazer, yet fuel economy of 48.6mpg has been adequate and it delivers acceptable pace on long journeys. The Citroen doesn’t deliver much in the way of fun from behind the wheel – there’s quite a lot of lean in corners – but those after an involving drive would probably look elsewhere anyway.

Dislikes? While I accept that styling is subjective I’ve never warmed to the design, which is odd because it does have some smart features. The alloys look good, there are appealing splashes of metallic detailing inside and the Belle Ile Blue paint is eye-catching.

But to my eyes at least – as the C3 Picasso-based South America-only AirCross showed (Issue 1,110) – no matter what styling add-ons you give this Citroen, the basic shape makes it look ungainly. That’s the price you pay for practicality, I guess. I’d also like a bit more boot space for baby gear when the rear seats are up.

Overall, though, the C3 Picasso has proven a useful addition to our fleet – and that’s something which, for once, father and daughter agree on wholeheartedly!

“The Citroen’s looks have proven controversial. While Graham isn’t a fan, I love the chunky lines and bold detailing, which inject some flair into the supermini-MPV sector. And this doesn’t come at the expense of practicality and versatility.”