Citroen’s C3 Picasso is aiming for the top of the supermini-MPV class – but does it offer more room and value than its Nissan, Daihatsu and Kia rivals? 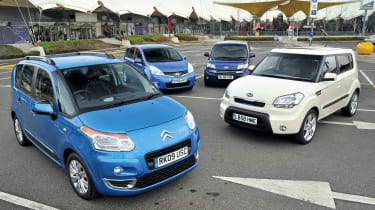 EVERY car maker has its own speciality, and people carriers are rapidly becoming what Citroen does best.

The supermini-sized C3 Picasso is the latest addition to the firm’s MPV line-up, and should benefit from the lessons learned developing Picasso variants of the C4 and Xsara. The C3 is designed to look good, drive well and be easy to live with, but it faces stiff opposition.

The other new kid on the block is the striking Kia Soul. It has already beaten the Skoda Roomster (Issue 1,054), and the Korean model has price on its side. For the cost of the 1.4 petrol C3 Picasso here, you can have a 1.6-litre diesel Kia.

And the competition doesn’t get any easier, because the Nissan Note is a part of the supermini-MPV establishment, with a versatile cabin and loads of kit in flagship Tekna trim.

Completing the C3’s rivals is the Daihatsu Materia. But is its price low enough to make up for its ‘love it or loathe it’ looks and limited model range?

Practicality is the first priority for anyone buying a supermini-MPV, and that ultimately settles this test. This is bad news for the Daihatsu Materia, because its small boot counts heavily against it. There’s no denying the quirky hatchback is good value, but it falls short in too many areas and finishes in a distant last place.

Separating our remaining trio is a lot more difficult. The new Soul is the best car in the Kialine-up due to its sharp styling, impressive dynamics and strong performance. Its cabin is alsospacious, yet it can’t match the Nissan or Citroen for practicality – and that leaves it third overall.

Despite the Note’s advancing years it is still a class act. With its thoughtfully designed cabin, engaging dynamics and long equipment list, it deserves to be on any buyer’s shortlist – but should it be at the top?

In the end the answer is no, because it is just pipped to the post by the new C3 Picasso. For such a small model, the Citroen provides remarkable amounts of cabin space and feels both refined and grown-up on the move. For many families it will be all the car they ever need.

With its versatile cabin, distinctive looks and great refinement, the French car demonstrates that you don’t have to compromise when choosing a budget family model.

The Nissan is no longer the clear class leader, but it still holds plenty of appeal. It rivals the Citroen for interior space and comes loaded with standard kit.

Third place is harsh on the new Soul. Good to drive and with striking looks, it proves the Korean firm has character. Yet in this company, it lacks versatility.

The Daihatsu feels outclassed here. While it provides plenty of cabin space and standard kit for the money, the driving experience and limited boot let it down.