Our mini-MPV proved its worth with an awkward load to carry... 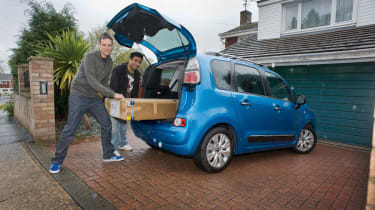 I’m keen to go swinging this summer. Sounds dodgy, I know, but don’t worry... it doesn’t involve throwing the keys of the C3 Picasso into a bowl at some seedy suburban party.

No, the swinging I want to do is in on a piece of garden furniture I bought last summer which has languished in my mother-in-law’s garage over the winter. Given its size, transferring it from Crawley, in West Sussex, to London could have been a bit of a problem.

But it’s just the kind of task our Citroen performs with ease.

Few small cars can match it for versatility. With fold-flat seats in both the front and rear, you feel like football’s tactical wizard Jose Mourinho as you plot your options and decide which formation suits you best.

This time round, with my brother-in-law Samit providing the muscle to help me get the swing into the car, it was a pretty simple decision to make. Fold everything flat bar my seat and the swing was slid in and ready to make its journey to the capital. Brilliant! Offering a van-like capacity in seconds is a trump card of the C3 Picasso. But as I reported last time out, things aren’t quite so clearcut once you start packing family members in.

On the eve of a holiday to the north of Scotland with my wife Seema and daughter Isla, I started to have reservations about whether it would be able to accommodate two large cases, plus all of our baby gear.

In the end, I borrowed a larger car from our fleet. Given how easily we filled that up, it was probably the correct decision, but a pity all the same. I’ve found the Picasso to be really comfortable to cruise in on longer trips and know it would have excelled on my M1 and M6 marathon.

The Citroen is spending most of its time in the city, and so far has proven to be a perfectly good family car day to day. It’s easy to drive, simple to park, very economical (48.6mpg) and surprisingly nippy in the cut and thrust of urban traffic.

Other features which I like are the false floor in the boot, the simplicity with which Isla’s car seat can be fitted – not all cars’ Isofix points are as easy to negotiate as the Citroen’s! – and the driving position. It’s effortless to get comfortable, a real bonus for a six-footersuch as myself.

Even the digital readouts are beginning to grow on me; it’s reassuring to have a constant reminder of how far away you are from running out of fuel when you’re as absent-minded as I am.

There are niggles, though. The sat-nav’s traffic alerts are erratic at best, and as I reported in the Fleet Watch panel in Issue 1,112, it even lost the mapping for the whole of south London on one occasion. In short, I simply don’t trust it, which is a major drawback for a route finder.

And while the build quality is undoubtedly better than in Citroens I’ve driven in the past, the cover for the panoramic roof is terribly flimsy.

These don’t detract from a pretty impressive package, though. I’ll certainly be raising a glass to the Citroen when I’m sat on my swing in the garden this summer – and as you can see, it’s finally ready to use!

“I also lost patience with the sunblind in the Picasso. I’m not a fan of panoramic roofs at the best of times – I prefer dark cabins to bright and airy ones – and the blind fell off and hit me on the head as I tried to pull it shut...”James Disdale