A family man needs a family car, so how is our mini-MPV fitting in with the Hope household? 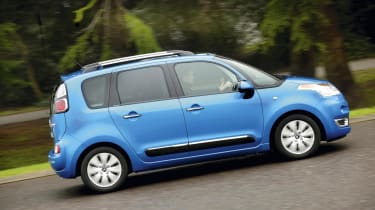 Little people mean big changes, as I’ve found out since my daughter Isla was born in August last year.

That crazy adventure I was planning around Middle East hotspots like Syria and Lebanon? Forget it. Any holidays now will be in a baby-friendly resort. Saturday afternoons cheering on Arsenal? Long gone. I now spend more time singing songs like The Wheels On The Bus than about Andrey Arshavin.

And as for transport? Those ambitious plans for a Porsche long-termer are on hold. “A family man needs a family car,” barked road tester Lesley Harris when informing me of my latest set of wheels.

So it was that I was introduced to the second new arrival in my life in recent months, the Citroen C3 Picasso. And it’s fair to say it wasn’t greeted with the same enthusiasm as the first.

While there are those in the Auto Express office who argue the little French car efficiently executes a difficult task – making what is essentially a van-like shape appear attractive – I am in the opposite camp.

It’s all too blocky for my taste, and with the vast expanse of glass created by the panoramic roof, I felt like I was steering a greenhouse on wheels the first time I hit the road. Family man? White van man, more like!

Initial impressions of the cabin are more positive, as the C3 Picasso seems well built and infinitely more robust than the C4 I ran a few years ago. And in terms of packaging, it is one of the cleverest cars on the road. Fold-flat seats, both front and rear, give the potential to carry big loads, while every possible nook and cranny has been taken up for usable cubby space.

Fit Isla’s Maxi-Cosi child seat in the back, though, and the problems begin. As mum Seema prefers to be beside her, folding the rear seat flat isn’t an option. That means boot space isn’t nearly as generous as it could be, and suddenly items such as Isla’s play ring or pram – easily swallowed by my previous VW Tiguan – are taking up too much room.

Tie a visit to gran’s in with a trip to the supermarket – as we did the other week – and the C3 Picasso fills up very quickly. That’s not a criticism, but it’s worth remembering that although the Citroen is targeted at family buyers, it’s based on a supermini – and undoubted interior cleverness doesn’t magically make it into a big car.

Still, those small dimensions are making it easy to thread through urban traffic, while finding parking spaces is a simple business, too. Away from town, the C3 Picasso is a comfortable cruiser, offering good refinement at motorway speeds.

The only problem to date has been a puncture on the passenger side front tyre, repaired by Kwik-Fit in Beckenham, Kent, for £18.50. So I’m back on the road again, and looking forward to letting you know how family Hope fares in the Picasso over the coming months.

I got to spend some time with our new C3 Picasso when taking the pictures for our recent Nissan Cube group test.

While the C3’s versatility was never in doubt, its refinement proved to be a pleasant surprise. Low levels of road and wind noise combine with a supple ride to give the Citroen a big-car feel on long journeys.

Adding to the supermini-MPV’s grown-up credentials is the torquey 1.6-litre diesel engine, which delivers muscular mid-range performance. Only the French machine’s fuel return of 38.4mpg is cause for disappointment so far.