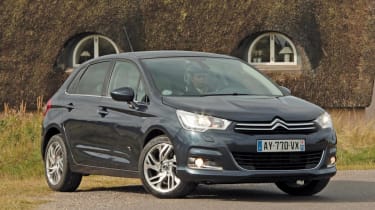 The C4 is a competent compact family hatchback. It’s good looking, well made, relaxing to drive and efficient. Yet there’s a feeling that Citroen has toned down the C4 in order to put some distance between it and the upcoming DS4 crossover. It doesn’t stand out in the way that a Citroen should, and while it’s a good family car, there are plenty of rival models available that offer buyers a bit more spark.

Is this the Citroen that will ‘C’ off competition from Ford’s new Focus and the VW Golf? The French company has high hopes for the C4 – it’s been completely revised, getting a new look, even more economical engines and a real upmarket feel to tempt UK drivers.

On sale in January, prices will start at £16,000, rising to about £22,000. No three-door version will be available, but there will be a range-topping DS4 crossover to go with this five-door model. The new C4 has lost the distinctive rounded shape of its predecessor. It has a smart front end, with a C5-derived face and clamshell bonnet, but despite the long slashes in the sides and neat tail-lights, it’s all rather conventional.

It’s longer than its predecessor by around 5cm (at 4.33m), as well as being wider. And combined with a panoramic glass roof, the cabin feels spacious and airy. The boot is bigger, too, at 408 litres, while further neat touches include coloured instrument lighting for the digital dials, a trip computer that helps you to drive more economically, and a choice of polyphonic tones to replace the usual dash beeps.

Material quality is better than ever – with soft-touch plastics and classy metal trim – and the cabin is logically laid out. Equipment is decent, too. All VTR, VTR+ and Exclusive models are likely to have ESP, air-conditioning and alloy wheels, with the top-spec Exclusive getting leather and Bluetooth. Blind spot monitoring will also be available.

Out goes the controversial fixed-hub steering wheel of the old C4. As a result, the cabin feels similar to the exterior: classy but rather conservative.

Despite being bigger, the C4 doesn’t weigh any more than before. Yet Citroen has still managed to ensure a maximum five-star Euro NCAP crash test rating.

Under the bonnet, there’s a choice of three petrol engines, with 94bhp, 118bhp or 153bhp, and three HDi turbodiesels with 90bhp, 110bhp and 148bhp. There will also be a stop-start-equipped 110bhp e-HDi from launch that emits around 109g/km of CO2. It will be joined by a tax-exempt 99g/km version shortly after.

Lower-powered models come with five-speed manual gearboxes, while higher-powered versions get a six-speed unit. A four-speed auto is available on the 118bhp petrol, while the 1.6-litre HDi diesel is equipped with Citroen’s automated manual gearbox, boasting steering wheel-mounted paddles or a selector on the centre console. It’s notoriously jerky – and it’s a shame there’s no twin-clutchtransmission, such as Ford’s PowerShift system or Volkswagen’s DSG, on offer.

On the motorway, the C4 is an excellent performer, thanks to a long top gear and fine ride, bolstered by comfortable seats and a lack of wind noise. In corners, it’s agile, but the precise steering could do with more feel. As a result, the overall package isn’t particularly engaging. In comparison, a Golf is more fun to drive, while we expect the new Focus to be even better.

Is the C4 a class leader? Not really. There’s much to like about it, but it won’t worry the established players too much.

Rival: Volkswagen Golf With a wide engine range, brilliant build quality and an accurate, rewarding driving experience, the gimmick-free Golf is about as good as hatchbacks get.