The C4 looks smart and is keenly priced, while it's a very refined cruiser, but you should be wary of depreciation. 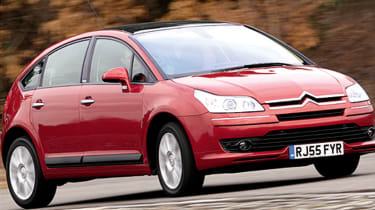 Driving: The C4's driving experience is very good. The soft suspension delivers a cushioned ride which doesn't deteriorate on rough roads and although there's a delay between turning the steering wheel and anything happening, once into corners, the C4 is well behaved and quite enjoyable. Lazy steering aside, it's a competent car to drive. Some of the petrol engines can disappoint though. The 2.0-litre petrol unit is ageing and the sporty 180bhp VTS version never really offers true hot hatch go. Diesels, in contrast, are very good. Both 1.6-litre and 2.0-litre HDi units provide plenty of punch, strong torque and very smooth, refined manners. Elsewhere though, both the gearbox and brakes come in for criticism. The former has a mushy shift, while the latter's soft pedal has too much travel and no bite, with modest stopping power.

Marketplace: Arguably the most handsome car in its sector, the C4 is elegant, well detailed and oozes French style. It comes either as a smart five-door hatch or more radical three-door, which Citroen near-viably calls a 'coupe'. But to confuse matters, while engines are shared across both variants, trim levels are unique to bodystyle, making for a muddled line-up. It's hard to compare three- and five-door models for standard equipment, and makes comparisons with rivals tricky too. Vauxhall's Astra is the C4's most obvious rival, as it comes in practical five-door and more sporty three-door format. Renault takes a similar approach to a lesser degree with the Megane, while the five-door Honda Civic is probably the most radical family hatchback there's ever been. More conventional competitors include sister company Peugeot's 307, the Ford Focus and Volkswagen Golf.

Owning: If only the Citroen's exterior style were matched by its interior. On first inspection, the unusual layout and static-hub steering wheel bode well, but the ergonomics are flawed. It's as if Citroen's designers got so bogged down with the hi-tech layout, the forgot to make it user-friendly. The stereo and heating controls are mounted too low, you need long thumbs to reach the tiny buttons on the wheel hub, and there are four different digital displays. What's more, storage is limited and at the rear, only Seat's Leon is more cramped for occupants, while the 320-litre boot is among the smallest in the family hatchback sector. Furthermore, while diesel engines are economical, those ageing petrol engines return unimpressive mpg figures, while Citroen's willingness to offer cashback deals on new vehicles hurts retained values. Surprisingly, the C4 also proves expensive to service - but as those intervals are stretched to 20,000 miles, costs should be comparable with rivals.