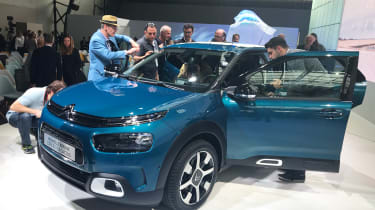 Citroen has announced UK prices and specifications for the facelifted C4 Cactus, and order books for the French firm’s more conventional C-segment offering are now open, with first deliveries expected at the beginning of April.

Prices start at £17,295, though that’s for the new C4 Cactus Feel Edition, which comes fitted with a 1.2-litre PureTech 82 petrol engine and is available for a limited time only. It also lacks Citroen’s new Progressive Hydraulic Suspension system – one of the headline new features of the updated cactus – but does feature new Advanced Comfort seats, cruise control, LED daytime running lights, plus a seven-inch infotainment display with Android Auto and Apple CarPlay.

Two core trim levels are available. Feel cars start from £17,965 with a PureTech 110 1.2-litre petrol engine, with the Progressive Hydraulic Suspension setup included as standard. A new, more potent 128bhp version of the PureTech 1.2-litre petrol is available from £18,765, while the BlueHDi 100 diesel model kicks off from £18,995.

Range topping Flair models are priced from £19,865 with the same spread of engines, but additional equipment in the way of a panoramic glass roof, satellite navigation, rear parking sensors and a reversing camera, plus Citroen’s full suite of driver assists. The PureTech 110 petrol engine is available with an automatic gearbox too. 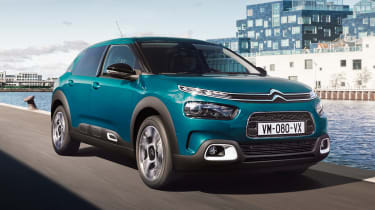 The Citroen C4 Cactus debuted at the Geneva Motor Show back in 2014 as a quirky, crossover inspired C-segment hatchback entry. With this refreshed model, gone is the car’s distinctive, Airbump-plastered look, replaced by more conventional hatchback styling. A new look, new cabin comforts and more powerful engines are also on the menu, plus Citroen’s latest suspension technology.

The refreshed design marks a departure from the original’s chunky crossover appearance. The new C4 Cactus steps more towards a standard family hatchback in terms of how it looks, as the firm intends to place more distance between its established cars and its new Aircross range of crossovers and SUVs. 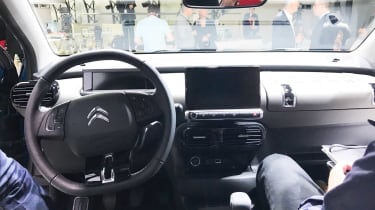 The front end of the new C4 Cactus takes heavy inspiration from its smaller C3 sibling. At the front you’ll notice the new chrome strip and badge arrangement, connecting to tweaked headlamps with new LED daytime running lights. The nose appears cleaner too, with less in the way of black plastic cladding and more body-coloured surfaces.

Noticeably, Citroen has pared back the Cactus’s Airbump panels. On the new car, the soft plastic elements are much more discreet, lining the bottom edges of the car rather than being placed high up on the doors and hatchback lid. The new tailgate is much cleaner in appearance than before, with a restyled rear bumper and new horizontal taillights.

The fresh design results in slightly shorter front and rear overhangs, for a more compact look than before. It’s just as customisable though, with buyers offered a total of 31 different exterior colour combinations and a choice of five alloy wheel designs. 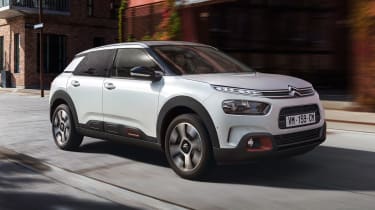 In contrast to the large-scale exterior shake up, the car’s cabin is virtually unchanged, retaining its spacious dimensions and horizontal design. However, Citroen claims it’s a more comfortable place to sit, thanks to the usage of a new, thicker high-density foam in the Advanced Comfort seats.

Visually, the seats are plusher looking than before, and are supposedly inspired by the iconic soft looking padded seats found in many of the brand’s older family cars. It should be quieter in the cabin too, thanks to additional sound insulation and thicker windows.

The facelifted C4 Cactus will be the first car the firm sells in Europe to make use of the new Progressive Hydraulic Cushion suspension technology. The new system adds two hydraulic stops in place of the traditional single mechanical setup. Citroen claims that the new hydraulic stops are better at dissipating energy when the car hits potholes and bumps in the road, keeping the car flat and improving the ride quality. The firm says it should improve comfort at lower speeds – as well as on smoother roads, too. 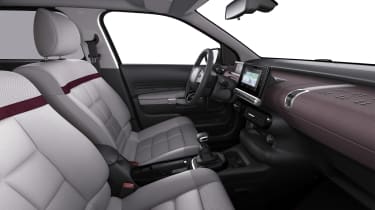 Do you like the look of the facelifted Citroen C4 Cactus? Let us know below...