A full buyer's guide for the Jensen Interceptor (1966-1976) including specs, common problems and model history... 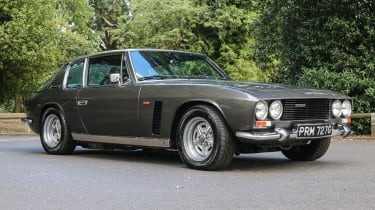 Cast your mind back to the early 1970s – the news a grim mixture of industrial strife and discord in the Middle East. No wonder we longed for an escape; and the cinema provided it. It was a world where supercars were celebrated, and a Technicolor drive to the French Riviera in a massively powerful GT was the done thing.

Cast into this fantasy role of swaggering jetsetter, the Jensen Interceptor had it all: square-jawed styling by Carrozzeria Touring, a thumping great V8, and a suitably grandiose name. It was a recipe that worked very well – just look at Iso, De Tomaso and Monteverdi…

The Interceptor was launched in 1966 as an up-to-date replacement for the fast-but-raw C-V8. Its all-steel body was as rigid as a monocoque, and was a radical step for Jensen. Initially, the body was assembled in Italy by Vignale, but that was soon brought in-house.

Sadly, the Interceptor – and Jensen in its initial incarnation – petered out in 1976. However, just like Mike Tyson, it wasn’t averse to the odd comeback: first during the 1980s and ’90s, and again in 2007. That’s a reflection of the popularity of the Interceptor, and proof that we’re all suckers for a healthy dose of escapism.

Which Jensen Interceptor to buy?

Buying an Interceptor is easy if you stick to one fundamental rule: buy the best body you can afford. As prices are not particularly high for such a complicated and intricate machine, a lot of the value of the car is in the body. Buying a car that requires serious welding is never a great idea, as it will often cost significantly more than the car will be worth when complete.

You will also have to make some tough choices on originality versus usability. The Interceptor is extremely receptive to engine, suspension and brake upgrades, and buying one that has been improved could potentially give you something more enjoyable, but an original example will undoubtedly be a much safer investment. The problem with finding an original example is that build quality from the factory was patchy from the factory.

You will of course need to decide on what age and spec of Interceptor you want. The were a few changes over the years, and generally the earlier cars were screwed together a little better. Not that that will really matter today, as most will have been rebuilt.

Two of the more special versions that are worth considering include the four-wheel drive FF, as well as the convertible.

• Body panels: being handbuilt, bodies are time consuming and expensive to repair – and even simple changes, such as bonnets, will cost about £1000 thanks to the adjustments required to make one fit your car. Also remember that, the earlier the car, the higher quality its body will be – Mk3s saw a notable drop.

• Rust: corrosion is an Achilles’ heel, and you’ll need to be thorough in your inspection. Most important is to check the side beams are in very good condition. Replacement will cost around £2000 per side.

• More rust: other places of concern are the footwells, the windscreen surround, wheelarches, and anywhere else where lead-loading was used to finish off the body during the build process. 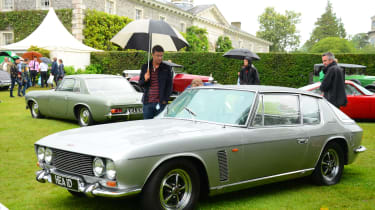 • Powertrain: engines and gearboxes are a known quantity, with the 6.3 being the most reliable of all the V8s. Rebuilds are relatively cheap, too (budget for £5000), although a few basic checks should see you right.

• Cooling: keep a keen eye on the cooling system and oil pressure (it needs to be at 30-40psi at idle) and listen for untoward noises from the pistons and valves.

• Oil leaks: also, make sure the gearbox isn’t leaking – a rebuild costs around £1000. As for the extra complexity of the FF, don’t worry. They’re bulletproof!

• Interior: a tatty interior will cost big bucks to put right, but as they’re hardwearing you can afford to be choosy if you encounter one on your travels.

1966: Interceptor launched, powered by a 6276cc Chrysler V8 and Torqueflite transmission. A mere 23 were built with a four-speed manual ’box. The FF was also introduced, with 4WD and ABS. Identified by a 4in stretch of wheelbase, but cost 50% more than the standard car. 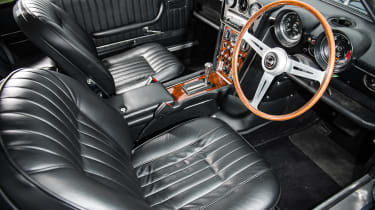 1973: The 7.2-litre engine is standardised – considered by specialists to be the nicest of all.

1974: Convertible arrives (and later on, a strange fixed-head version of it) – it will be rare, with only 267 examples produced.

Considering the Aston Martin DBS and V8 were Interceptor contemporaries, it’s amazing the difference in values now. And given the cost of servicing a Jensen in comparison with its Newport Pagnell compatriot, one can’t help but conclude that the Interceptor is a bargain.

To drive, it’s more GT than sports car, but a well-sorted example is fun in the country and effortless in the city. You’ll be amazed at how little it rolls in bends and how simple it is to accurately position – and, with a good-sized boot and rear seats, it’s a car you can enjoy every day. Fuel consumption aside. Performance upgrades are simple, too, and not frowned upon within the Jensen scene.

For the money, there’s little to touch an Interceptor, and as long as you make sure you pick one that’s been loved, and that has a body in tip-top condition, there’s no reason you won’t enjoy it for years to come. 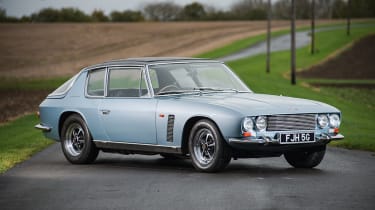 Few cars at this end of the market are more difficult to value. Being susceptible to rust, basketcases are now harder to find. Values in general have been steadily rising, with the fixed-head coupé and convertible forging ahead.

There are few standard cars around, as most have been modified with uprated engines or brakes, but if you take £30,000 as your absolute minimum you’ll bag a perfectly usable Mk1, 2, 3 or SP. Spend £45,000 for something in good condition, with £65,000 being the the limit for the best regular interceptor.

A convertible model will generally command 25 per cent more than a coupe. The FF is also the considerably more sought after, with top cars now pushing £100,000, although good condition cars can be picked up from £50-£70k.