A full buyer's guide for the Armstrong Siddeley Sapphire (1952-1960) including specs, common problems and model history... 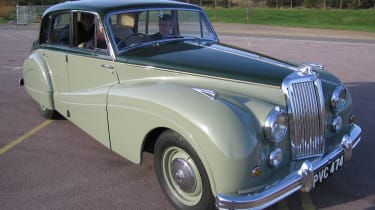 Armstrong Siddeley may not be all that well known outside of classic car circles today, but during the first half of the 20th century, it was the well-regarded manufacturer of aircraft engines and top class luxury automobiles. Arguably the company’s finest models were the opulent Sapphire range built during the ‘50s.

Built to very high standards, and priced accordingly, the Siddeley Sapphires were ultra-luxurious and offered decent performance too. Almost 60 years since the last Siddeley Sapphire rolled off the line, we take a look at what these stately cars are like to own today.

Which Armstrong Siddeley Sapphire to buy?

The Sapphire 346 was the most numerous, and was produced for the longest period. It offers a good blend of performance and luxury, with a 3.4-litre straight-six motor and styling that has aged gracefully over the years. The 236 and 234 were less successful, and their subjectively awkward styling and short production runs make them the rarest models today.

The 120bhp 234 was an attempt at a sporty Sapphire, and sure enough it could reach 100mph under ideal conditions. The 85bhp 236 was the more genteel option. A smoother six-cylinder engine and optional ‘Manumatic’ transmission were aimed at those content cruising the country lanes.

The most desirable model of all came just two years before all production ended: the Star Sapphire. This was a replacement for the successful 346, and its 165bhp 4.0-litre straight-six along with numerous detail changes gave it a real sporting flavour among its rivals. The additional torque of the bigger capacity engine gave it the best performance of the Sapphire range.

Eminently usable, many Sapphires remain in regular use as wedding cars or weekend drivers. The 236 and 246 models were somewhat less successful than the larger 346 and Star models, which add classic looks and a decent turn of speed to the equation. Limousine variants offer greatly increased rear seating space.

• Replacement parts: body panels and bumpers are solid and replacement parts can still be sourced from the car club or repaired by classic car specialists.

• Suspension: the front suspension requires regular oiling, while worn bushes can make the car feel loose, especially at the rear.

• Corrosion: rust can appear in a number of areas, and the body work should be checked thoroughly for bubbling or peeling especially around the arches and foot wells. The boot tends to let in water, which can pool and cause corrosion.

• Quality: built to very high standards when new, the Sapphire models are still very usable if well maintained. A number of upgrades can make living with your classic a lot easier, and previous owners may have already carried some of them out.

• Indicators: upgrading the trafficators on the MK1 models to modern indicators can be done by modifying the extra reversing lights and adding amber light bulbs and wiring.

• Tyres: cross-ply tyres may get you points for originality but for daily use a set of modern radials greatly enhances braking, handling and by extension your safety.

• Electronics: electrical systems on cars of this vintage are not always the most reliable. Modern ancillaries, wiring upgrades and alternator conversions can all make things a lot easier in the long run. That said, the Siddeley electrical system is simple enough that tackling faults is not overly daunting.

• Carbs: twin carb upgrades on 346 models is common as it is a relatively easy modification and liberates an additional 25bhp. All American cars were specced this way.

• Coolant: cooling systems have more than enough capacity for the UK’s climate, however a correct glycol mixture should be maintained and hoses need regular checking.

• Dampers: overly stiff replacement dampers can compromise the ride and cause damage to mounting points.

The Siddeley Sapphire remains an eminently usable classic, however availability is limited, so you may need to wait a while before the right car comes along. Despite this, prices remain depressed, and a good condition Siddeley 346 can be yours from as little as £5000. Even the very best refurbished examples tend not to go for much more than £12,000.

The much rarer Star Sapphire models are also in this ballpark. The smaller 236 and 234 models also have their own charm, but due to low production numbers tend to be even harder to find with prices sitting a bit lower than the larger cars.