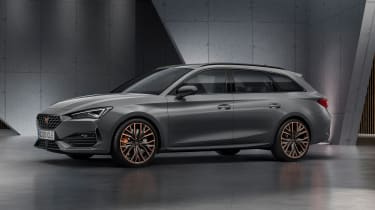 Cupra, the performance offshoot of the SEAT brand, has released its hot take on the Leon. Available in both hatchback and estate forms, it will produce as much as 306bhp in its most potent form, but will also be offered with a plug-in hybrid powertrain.

Designed, engineered and built at Cupra’s new purpose built facility in Martorell near Barcelona, the Cupra Leon will face rivals like the Hyundai i30N and Ford Focus ST. It’ll also need to fend off competition from within the Volkswagen Group itself: both the Skoda Octavia vRS and VW’s own Golf GTI will make its debut shortly.

From the outside, the Cupra Leon sports a more menacing look than its SEAT relative - and not just because of the two unique matte paint finishes available. The front bumper has a large open air dam, plus the new copper-coloured logo on the nose. Depending on the model, there’s a choice of 18- or 19-inch alloy wheels finished in silver, black or a mix of copper and black. 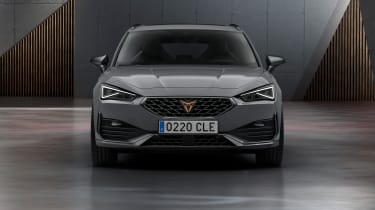 Whether choosing either the five-door hatchback or full estate body style, the rear is set off by the Leon’s distinctive full-width light bar, while below it sits a new bumper featuring a pair of copper-trimmed tailpipes to each side of a deep rear diffuser. The changes, according to Cupra, also boost aerodynamic performance; the latest Leon is eight per cent more aerodynamically efficient than the previous version.

Inside, the copper theme continues, with highlights on the seat stitching (there’s two types of sports seats to choose from), air vent surrounds, and the steering wheel. The wheel itself is similar in design to the SEAT Leon, but gains two new switches: one starter button, and another to adjust between one of four drive modes: Comfort, Sport, Cupra and Individual.

The 12.3-inch digital instrument panel gets a new ‘Sport’ menu view, which places the rev counter prominently to the centre of the driver’s view, while showing power, torque G-force and turbo boost readouts.

Every engine option in the Cupra Leon range features some degree of forced induction, while one also gets hybrid tech. The Cupra Leon PHEV matches a 1.4-litre turbocharged petrol engine mated to an electric motor and 13kWh battery. It’s enough to return 242bhp but also a 37-mile electric only range and CO2 emissions below 50g/km.

Traditional combustion units make up the rest of the range. The Volkswagen Group’s tried-and-tested 2.0-litre turbo is offered with 242bhp and 370Nm, or 296bhp and 400Nm. All three of these options come as standard with front-wheel drive, an electronic limited-slip differential and a dual-clutch automatic gearbox. 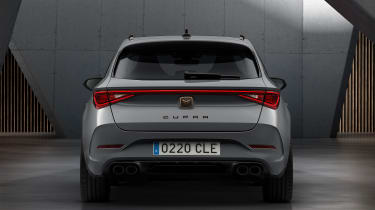 However, a more potent version with four-wheel drive is reserved for the Estate. Here, the 2.0-litre unit makes 306bhp, enabling the hottest Leon to sprint from 0-62mph in 4.8 seconds and on to a 155mph top speed.

To keep the power in check, Cupra has subjected the Leon’s chassis to a more sporting setup relative to its SEAT counterpart. The ride height sits 25mm lower at the front and 20mm lower to the rear, while an adaptive damping system is able to adjust its rate of response based on the driving mode. Steering is based on an electric power steering system, which Cupra claims is “the most progressive yet.” Front brake discs by Brembo, meanwhile, measure 370mm, and they’re gripped by copper-coloured calipers.

A comprehensive list of equipment available in the Cupra Leon includes full LED lighting (including ambient lights inside), keyless entry, and a 10-inch touchscreen infotainment system with 3D navigation, gesture control and both Apple CarPlay and Android Auto. 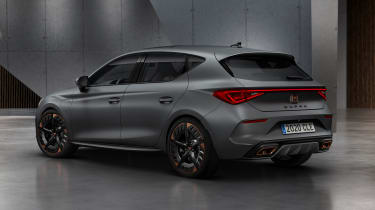 Prices are still to be confirmed, but buyers can now pre-order a car on the Cupra website.

What do you think of the Cupra Leon? Let us know in the comments...