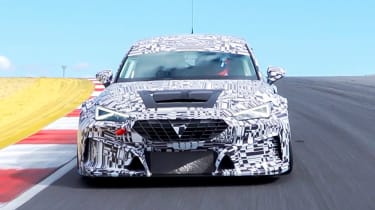 This is the Cupra Leon Competicion racer. It’s a track-only version of the road-going Cupra Leon hatchback, designed to be competitive in the World Touring Car Championship. Buyers can secure their example on Cupra’s official website now – and the brand says it’s the first touring car available to order online.

Like the road-going Cupra Leon, it’s powered by a turbocharged 2.0-litre four-cylinder petrol engine. However, where the standard hatchback has an output of 296bhp and 400Nm of torque this track version produces 335bhp and 410Nm of torque – enough for a 0–62mph time of 4.5 seconds and a top speed of 162mph.

The Cupra Leon Competicion also receives a host of chassis upgrades, including a fully adjustable suspension system, larger diameter disc brakes and an FIA-approved roll cage and racing seat. There’s an equally extensive list of aerodynamic upgrades, including a new front splitter, a vented bonnet and an enormous rear wing.

Most interestingly, though, the Cupra Leon touring car features 3D-printed door mirrors, air intakes and cooling ducts. The company says the components can withstand wind speeds of up to 180mph, and that the resin used in their construction is considerably lighter than conventional plastic, helping to improve the racer’s fuel economy.

What do you make of the new Cupra Leon Competicion? Let us know in the comments section below… 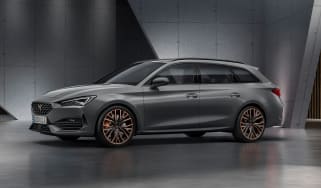