The Dacia Duster SUV has been updated for 2018, bringing with it fresh styling and extra kit 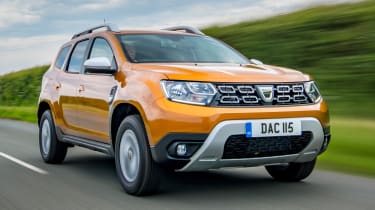 How Dacia is still able to offer so much car for so little cash is quite astounding. While entry cars are available for under £10,000 (or £129 per month) it’s the more handsomely equipped Comfort version that will make most sense to more buyers. It’s better built than before, drives well and offers unrivalled practicality at this price point. All the car you’d ever need, perhaps.

When Dacia first arrived in the UK back in 2012, it stunned the industry with its value-packed new car offerings. Six years later and its fundamental recipe remains unchanged, and the Duster is still the cheapest crossover money can buy.

For 2018, the firm’s sole SUV has been updated with fresh styling and extra kit – but with a similarly tempting price. But with the way we buy cars changing, is it the bargain it once was? We’ve driven it one the UK to find out.

• Best SUVs and 4x4s on the market

The first thing you notice is the new family face. While the design is a clear evolution of the previous car, Dacia insists every panel has been changed. As a result, the tweaks are easy enough to spot on the road; with a wider grille, sharper belt line and a redesigned rear. The designers have pushed the lights to the corners of the car to emphasise a thicker, sportier stance. 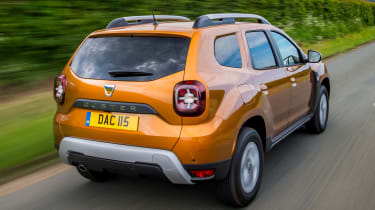 At launch, this naturally-aspirated petrol model is the only version you can buy. There’s no automatic gearbox (yet), but there’s a choice of 4x2 and 4x4 powertrains, as well as four trim options. A dCi diesel arrives later in the summer, while the punchier turbo petrol is due in 2019.

Like before, it’s the Access model that steals the headlines with its £9,995 sticker price. Opt for the bog-standard Duster and you’ll do without a radio or climate control – although every car now gets LED daytime running lights, electric front windows and extra bolstering for the driver’s seat.

Next up is the Dacia Essential, which boasts that all-important DAB radio and air-con. Prices start from £11,595 and open up an extended colour palette, too. Lots of buyers are expected to opt for the Comfort spec, however, which adds a colour touchscreen, sat-nav and a parking camera, as well as alloy wheels and cruise control. For just £1,500 more (or £20 per month), it’s the trim we’d go for.

Topping the range is the Duster Prestige, which gets premium features usually reserved for cars costing twice the price. Available from £14,395 (or £189 per month with a 10 per cent deposit) everything from 17-inch diamond cut alloy wheels to part-leather heated seats are included.

Both active and passive safety has been boosted, too. Dacia says that despite its buyers wanting to purchase at a famously low price, they aren’t prepared to scrimp on kit. Engineers have raided the Renault parts bin and sourced everything from blind spot monitoring to curtain airbags, a multi-view camera and automatic headlights. While lots of this is only standard on higher-spec cars, the overall vehicle frame has been reinforced on every model. 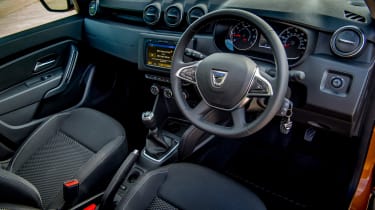 Take a seat inside and you’ll immediately notice how far the Duster has come since the first cars arrived in 2012. While it can’t challenge the Germans or the Japanese for perceived quality, the cabin feels built to last. The car is much quieter at 60mph, too, thanks to the marginally thicker side glass and improved sound deadening. The front seat cushions are longer, and there’s more adjustability than before. The driver’s chair also gets an armrest for the first time.

The dashboard layout is functional rather than flash, but the dials are easy to read and the touchscreen on our Comfort-spec test car felt more responsive than the system you’ll find on the latest Renault Clio, Captur or Kadjar. The piano-style buttons below are a nice, modern touch, too.

On the road, the basic 1.6-litre non-turbo petrol engine still feels wheezy, but it’s not devoid of character. You have to work it quite hard, yet the compliant and well-balanced chassis makes it surprisingly rewarding to drive. It’d be a stretch to call the Duster fun, but there are plenty of SUVs that offer less in the way of driver involvement. 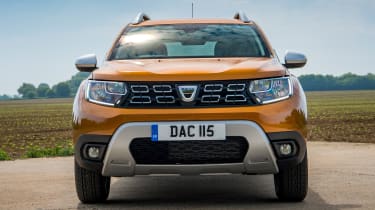 The new electric power steering is light but quick, and grip is good. The long-throw manual gearbox leaves a little to be desired, but the brakes have no trouble hauling the car to a confident stop. While the ride is a bit fidgety at slow speeds, things smooth out on faster roads – and the more supportive seats proved more than adequate over our 150-mile test route, as well. Of course, the 4x4 version are still pleasingly adept off-road, too.

Few cars offer as much space at this price point, either. There’s still loads of room for the family, with a big bench and Isofix mountings on each of the outer seats. Access-spec cars get a one-piece folding bench, while Essential models add a 60:40 split-fold function. They still can’t lie completely flat, but the 1,623-litre maximum load bay (on 4x2 cars) is three litres bigger than a Volkswagen Golf Estate. Dacia says you’ll find almost 30 litres of storage (20 per cent more than before) dotted around the cabin, too.