We love the Dacia Duster, but does the cheap as chips SUV still make sense with all-wheel drive? 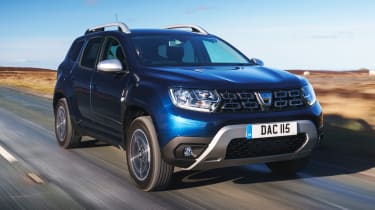 Be sure you need the added assurance of four-wheel drive before opting for this new 4x4-equipped Dacia Duster dCi. It’s more challenging to drive due to the short gearing, and it’ll cost more to buy and run than a 2WD model, too. As ever then, the bargain SUV makes more sense in its cheaper trims.

Despite the fact Dacia launched in UK less than a decade ago, the Duster requires little introduction. It is still the cheapest new SUV on sale, with prices starting from just £9,995.

If you want the space, rugged styling and raised ride height of a 4x4, but without the luxuries and price premiums associated with more expensive crossover rivals, nothing comes close. We love the Duster, and are currently running a front-drive diesel on our long-term test fleet.

But how does the same Duster fare with UK-friendly, winter-ready all-wheel drive? We’ve driven one – in the UK, no less – to find out. 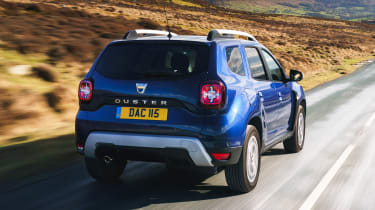 The diesel engine is impressively smooth for something unashamedly billed as a budget SUV. The manual box is relatively pleasant, too, which is handy given how often you’ll be changing gears. The 4x4’s short ratios are designed to boost traction on slippery surfaces, while also improving low-down torque for towing.

You’ll soon get used to setting off in second; familiarise yourself with this and it’s gutsy enough through town. But that short gearing means you’ll be sitting in sixth at 40mph, with plenty of turbo lag if you try to hurriedly push it up to motorway speeds.

Most of the time, the Duster runs in 2WD mode. You can switch to the car’s ‘Auto’ setting via a dial on the centre console, which also features a ‘Lock’ mode for really rough conditions. There’s a built-in 4x4 monitor, too, which gives the driver visibility of the car’s slope angle in real time.

This isn’t a fast car, however, so it’s not often you need the extra grip in everyday driving. Force it to run using all four wheels and you’re more likely to notice the fuel gauge dip than you are to sense the extra traction. A Suzuki Jimny is lighter and more adept off-road, too, so unless you regularly tow heavy loads or frequently suffer at the hands of adverse weather, the standard two-wheel drive Duster is a better bet.

That’s particularly apparent when you look at ownership costs. The 4x4 system will set you back a full £2,000 no matter which trim you opt for, while fuel economy takes a hit, too. For reference, the 4x2 version can manage up to nine miles more for every gallon of diesel you put in the tank. The Duster’s CO2 emissions suffer, too, with the 4x4 model sitting one Benefit-in-Kind tax band higher than the front-wheel drive car.

Elsewhere, however, the Duster remains a tough and dependable SUV. While it’s not the last word in luxury, it feels built to last and comes loaded with kit – especially in mid-range Comfort trim. These models get a seven-inch touchscreen with sat-nav, Apple CarPlay and Android Auto, as well as a DAB radio and a reversing camera.

As ever, the Duster makes most sense in the low to mid-range trims; we’d steer clear of the flagship Prestige cars, which add nice-to-have but largely unessential luxuries like keyless entry and climate control – for an extra £1,300.