Just like the rest of the Dacia range, the Duster has been facelifted. We test it out with the brand's new dual-clutch automatic gearbox 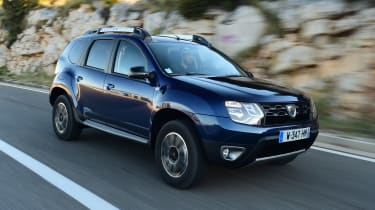 The new dual-clutch automatic gearbox in the Dacia Duster is a worthy choice, thanks to its smooth and fast shifts. Dacia’s SUV is still a great-value car overall too, with a low price, loads of space inside and a certain rugged charm to the driving experience as well. Don’t expect too much sophistication and you’ll find an impressive car underneath the slightly tired-looking design.

Along with the rest of the Dacia range, the Duster SUV has been updated for 2017. The changes here are much more limited than on the other cars, though, with a new automatic gearbox being the key addition to the line-up.

By way of an explanation for its move to add an auto, Dacia cites rising sales of automatics in Europe with more and more SUV buyers especially going for self-shifting gearboxes in their cars. This isn’t just any automatic, though: Dacia has brought in a sophisticated Renault-sourced six-speed dual-clutch EDC ‘box. 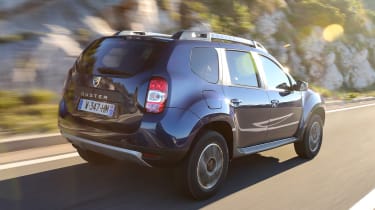 It’s a great fit in the Duster, shifting smoothly and quickly - it coped well with the mountain roads on our Croatian test drive, even on the steepest sections of route. It combines well with the punchy 108bhp diesel engine too, and while it’s a bit noisy, the powertrain generally impressed.

Unfortunately, the automatic gearbox isn’t configured to work with four-wheel drive, so the only version available is front-wheel drive only. It’s a shame for those who need the rugged Duster for tackling tougher terrain, but as a good-value family car, the EDC auto version is a worthy choice. It’s only available in higher-spec Laureate and Prestige trims which does push the prices up a little.

Next to the SsangYong Tivoli automatic, which is a little more powerful and refined but has a sluggish and dim-witted gearbox, the Duster looks a good bet. It beats the SsangYong for practicality as well, with a 475-litre boot that expands to 1,636 litres with the seats down. That’s bigger than the smaller (and more expensive) Tivoli’s 423-litre space that folds down to 1,115 litres. 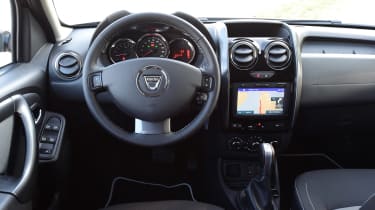 As it always has been, the Duster is great value for money when you consider the space on offer. There’s loads of boot space but passengers won’t feel cramped as there’s plenty of room in the back. The high ride height and rugged materials give it a go-anywhere, do-anything feel as well.

Hard-wearing interior plastics add to that impression, though partly as a result of that robustness, they don’t feel great to the touch. It’s hard to hold the bland design against the Duster too much, given the price and other strengths, but the Dacia is getting more and more old-fashioned as the years go by. A 7-inch touchscreen with sat-nav is standard on the Prestige car we tested, and although it’s functional and easy to use, the screen is angled away from the driver and is positioned a bit too low on the dash.

Still, the seats are comfortable, and the ride is as good as ever. We have only tested the automatic model on smooth Croatian roads so far - though there’s no indication it would be any different to the manual in the UK. It rolls in corners and the steering is vague and light but, a bit like the old Land Rover Defender, there is still a certain charm to the way the back-to-basics Duster drives.

We’d probably still go for a manual model, as it’s a bit more economical (64.2mpg and 115g/km versus 62.8mpg and 116g/km in the auto) and cheaper to buy. If the automatic appeals enough to overcome the cost, however, it’s still a great choice - and the Duster remains a great-value SUV overall.