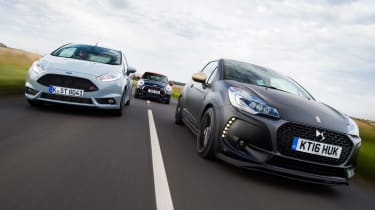 French manufacturers have a rich history in the hot hatch market. Search through the back catalogue of cars in this class and you’ll find a trail of brilliant models from the other side of the Channel – and since DS split from Citroen and set out on its own as a standalone brand, there’s a new small performance car on sale.

While the DS 3 has been offered in hot guise in the past, the DS 3 Racing was branded as a Citroen and only 200 cars came to the UK. There’s no cap on production of the new DS 3 Performance we’ve lined up here, with the company aiming to bring luxury and speed to the masses. But there’s a glut of talented hot hatches that have been doing this very convincingly for a long while now. 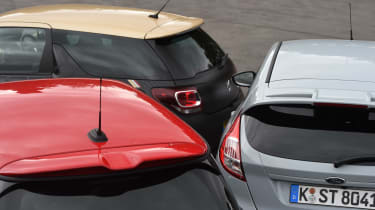 Ford’s Fiesta ST is a sublime-handling, tuned three-door, and here in new limited-edition ST200 guise it boasts some unique design features to set it apart from the rest of the range – not to mention a power hike. Meanwhile, the MINI John Cooper Works aims to offer a premium alternative to the ST, mixing the DS’s luxury with just as much performance potential.

However, when the Fiesta and JCW last met last year, the Ford came out on top thanks to the addition of its Mountune performance upgrades. Can the MINI turn the tables here, or will the DS 3 Performance sweep in and steal both cars’ thunder?

Does the new #DS 3 Performance have what it takes to beat the #Ford Fiesta ST200 and #MINI JCW Sport? aex.ae/2cKHw2k

The MINI is the only car available with an automatic box. However, we’d recommend sticking with the standard six-speed manual, as the positive shift action adds an extra layer of enjoyment to the driving experience, while there’s an auto rev matching feature that gives a little blip on the way down the gears, unlike in the DS or Ford. It will also save you £1,325.

DS doesn’t have the performance history of its challengers. While ST-badged Fords have been on sale since the nineties and MINI’s relationship with the Cooper nameplate dates back to the sixties original, DS Performance marks the introduction of a new era for the brand’s road cars.

Like the regular DS 3 and MINI, customisation options on these top-spec models are extensive. Both our cars have contrasting roofs, and different decal packs are available. With the ST200 what you see is what you get; it’s only available in Storm Grey. 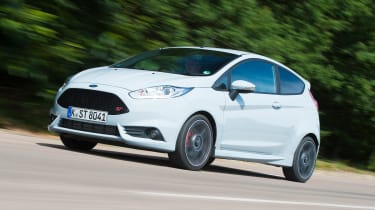 The ST200 is not the sweet spot in the fast Fiesta range. We’d save some money and go for a Mountune-upgraded ST-3 if you want more performance and just as much kit. Still, there are no complaints about the Ford’s revised chassis. It steers more sweetly, rides better, is the most practical of our trio and will be cheap to run. Factor in the engine and it’s more fun than its rivals. 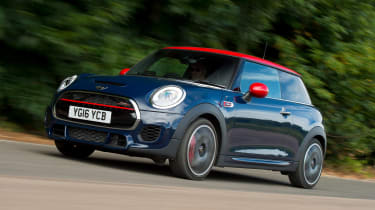 MINI’S JCW runs the ST200 a close second. It’s less pricey than you might think on a PCP deal, and while the extra power over the Ford gives it the edge in a straight line, it’s also slightly more economical. It’s still good to drive, but doesn’t serve up the same sensations as the ST, plus it lacks practicality. Costly options needed to level the equipment spec put it in second place. 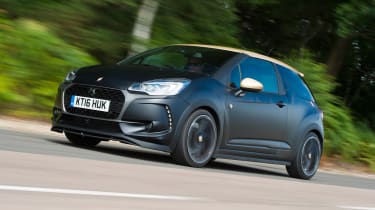 It’s easy to spot the DS 3 Performance Black’s roots; while the engine’s punch is impressive, and the chassis grippy, it still feels like an old car. The ride and refinement aren’t in the same league as its rivals, and although it’s well equipped and efficient, it won’t set your pulse racing. Ultimately, hot hatches have to cover all bases, and the DS is found wanting in some areas. 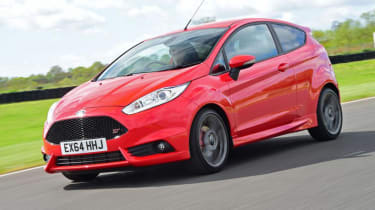 It’s not as quick as the JCW, but the regular ST is faster than the DS 3 or ST200. As it gets the ST200 chassis upgrades as well, it’s now even more usable, and you’ll save yourself at least 10 per cent over our test cars. 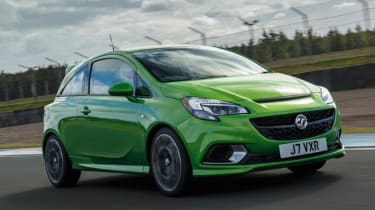 If performance per pound matters to you, the Corsa VXR delivers. It’s £4,365 cheaper than the DS, but offers similar pace, with 202bhp and 280Nm. But it’s not as talented as the Fiesta or MINI.