The first hot hatch to emerge from the DS Performance stable, the DS 3 Performance is only held back by its price 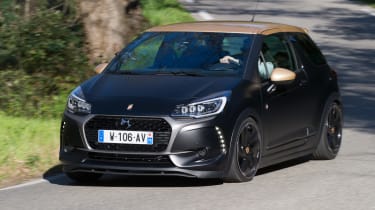 The DS 3 Performance offers a winning list of hot hatch ingredients. It’s grippy, agile and fast, but also manages to retain decent enough road manners to be usable every day. We'll reserve judgement on the low-speed ride for the UK, however, and the other stumbling block is the price: A MINI Cooper S is considerably cheaper, albeit with less kit, while there's a number of equally as talented yet better value hot hatches.

DS' recent launch as a sub-brand of Citroen has been widely spoken about, and now there's another brand to consider - DS Performance. This racy sub-section within DS means we have a number of fast, fizzy French models to look forward to in the coming years. But the first, and possibly the most important is this: the new DS 3 Performance.

The new car shares plenty with the previous Citroen DS3 Racing, but under the DS brand it will be a fully fledged production model rather than a limited-run special edition. Underneath the sharp new nose lies PSA Peugeot Citroen's 1.6-litre THP turbo petrol engine, which has seen service in cars like the Peugeot 308 GTI and RCZ. Here, it produces 205bhp and 300Nm of torque, which DS has paired with beefier brakes, lowered suspension, and a Torsen limited-slip differential.

That’s a recipe that should give the best small hot hatches something to think about. DS bosses are quick to point out that its more fast GT than GTI, but that doesn’t mean it’s gone soft. The 1.6-litre turbo has plenty of punch throughout the rev range and feels just as fast as the figures suggest. It sounds good, too, with subtle pops and bangs from the exhaust.

On a closed French mountain pass, the DS 3 was a real entertainer. Body control is taut, the steering is accurate and well-weighted and there’s a real sense of enjoyment about the drive. It feels a big step above the regular DS 3 in terms of performance and agility. 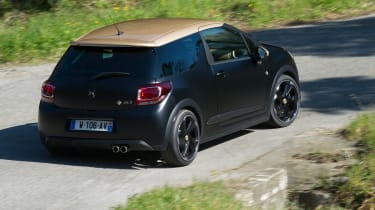 The Torsen differential tames understeer well and grip is plentiful, in the dry conditions of our first drive at least. Our only concern revolves around the ride. It felt composed at speed and on smoother French roads, but bumpier tarmac revealed a notably stiffer setup than the standard car.  When we drive the car in the UK, we’ll be sure to find out if it’s as engaging as a Ford Fiesta ST or as composed over bumps as a MINI Cooper S.

Performance spec also brings a few styling tweaks, but the look is a bit more subtle than the old DS Racing model. Along with the lower stance, there are new 18-inch alloys, carbon-fibre side mouldings, unique badging and a twin-exit tailpipe. It’s not as overtly sporty to look at as its sister model, the Peugeot 208 GTi, with DS claiming a more mature approach. Rest assured, if you want lurid colours and graphics, you’ll find plenty of them in the extensive customisation list. 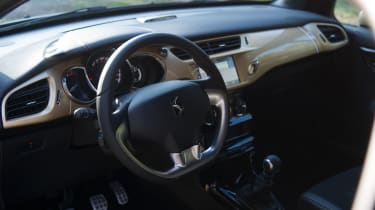 Inside, there are embroidered Alcantara sports seats and plenty of gloss-black trim, but apart from ‘Performance’ sill plates, it’s a largely standard DS 3 design. That means an attractive but not completely intuitive layout, and a mixture of high quality trim and a few areas of flimsy plastics.

The DS 3 Performance builds on mid-spec Elegance. That means it gets the new seven-inch touchscreen with Apple CarPlay, a DAB radio, xenon headlamps, climate control and auto lights and wipers. If you want sat-nav, though, you have to either pay £1,000 for the GT pack or step up to the £22,495 Performance Black spec.