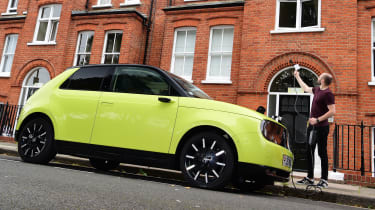 There's little to fault so far here. The Honda’s range of around 100 miles and a reliance on public charging are working well enough, but longer trips and colder weather are coming, so things could change.

One of the latest arrivals on the Auto Express fleet, the funky new Honda e, has been helping me to answer one very simple question: can you live with an electric car without being able to charge at home?

As with many people who these sorts of urban EVs are aimed at, I live in a flat without any option of charging at home. With a huge proportion of drivers living in urban areas and electric car sales growing, this is going to be a theme that becomes increasingly common. How exactly are people expected to live with them? A reliance on the public charging network is the only realistic option, so you can consider me a guinea pig.

This obvious compromise that I’d have to make when running an EV is the one thing that has stopped me from making the switch sooner. So it was going to take something pretty special to come along and change my mind. But the Honda e is just that; not only is it a cool and original approach to an electric car, crucially, it’s also very desirable. Few other EVs manage to achieve that.

Of course, the design won’t be to all tastes. Some people laugh, others stare and some genuinely have no idea what it is and want to chat about it. Very few cars attract attention in the same way as the Honda e –and no doubt the Charge Yellow finish of our car has something to do with it.

The version we have on our fleet is a top-spec Honda e Advance. Inclusive of the Government’s £3,000 grant for zero-emission plug-in cars, the Honda e will set you back £29,660. On a 36-month PCP deal, that works out at £311 per month if you can stump up a £6,500 deposit. Whichever way you look at it, this is a small electric car with a big price tag. 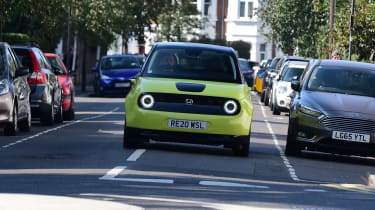 What do you get for that? Well, quite a bit, actually. As standard this Advance model comes with a 35.5kWh battery that feeds a more powerful 152bhp rear- mounted electric motor for a claimed range of 137 miles. Inside, there’s the full-width infotainment set-up with digital wing mirrors and rear-view mirror, heated seats and steering wheel, wireless Apple CarPlay, a sunroof, parking sensors and a rear camera. Oh, and the cool pop-out door handles.

There isn’t a single option fitted to our car, either. Charge Yellow is the only paint colour that’s standard; black, blue, white and grey are all £550, which seems a little odd. You can add leather, but the standard seats are finished in a soft-yet-textured fabric that looks great and is comfortable.

So the obvious question is how much of a headache is charging it? In short, it’s not been an issue. Over the past month or so, I’d usually charge it up once a week at the Source London point at the end of my street. With around 15 per cent left in the battery, a full top-up takes roughly four hours from a 7kW unit, which costs around £9. I’ve been averaging upwards of 100 miles on a full charge, which is 30 miles short of the official range, but I’ve had 120 miles out of it on a longer motorway drive. However, living and driving around central London – the Honda’s natural environment – 100 miles seems to be the average return so far.

And for battling traffic, squeezing through width restrictors and nipping into gaps, the Honda is proving to be the perfect runaround. Of course, outside of its comfort zone it could well be a different story. And a 270-mile trip north up the M1 awaits.