Promising test from Taiwanese producer Maxxis, with good performance in the wet 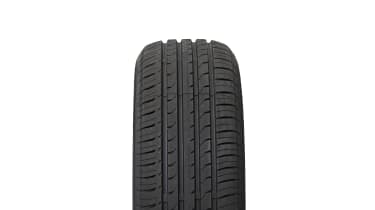 Taiwanese producer Maxxis was a regular in our tests in the noughties, and last featured in 2010. It didn’t trouble the leaders then, but now it’s making waves in tests, not least in our sister title Evo’s look at 18-inch tyres in 2019. It would have been a contender for the win had Evo been able to buy it in time for the test.

With that result in mind, we were looking forward to trying its 16-inch offering, the Premitra 5 HP5, and it didn’t disappoint. It’s been around since 2016, yet it saw off several newer designs.

The Premitra delivered a mixed bag of results, with the high being a win in curved aquaplaning, backed up by a very competitive fourth in the straight-line assessment. It was also fourth in the wet-handling test, just a few tenths behind our winner. As with others here it was limited by front grip, but it was at a higher level than most and the balance was among the best, with a stable rear. Traction was good, although you needed patience with the throttle in longer turns.

It secured another strong fourth in dry handling. It wasn’t the sharpest performer, but worked well before the tyre got hot. The biggest downside was fuel economy, plus cabin noise was among the highest.

“A lesser-known brand and model, yet with decent scores. It appears more awareness is necessary before Maxxis can be pushed further in the UK’s tyre market.”