Based on the 488 GTB, the SP38 has been unveiled at Fiorano for one of Ferrari’s most valued customers 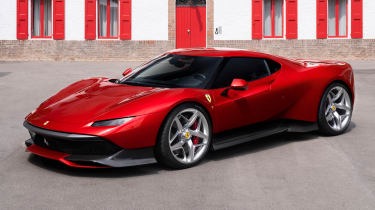 Based on the Ferrari 488 GTB, the SP38 is the newest creation from Ferrari’s One-Off programme. Built for one of Ferrari’s most dedicated customers, the SP38 has been redesigned both inside and out to create a unique car.

The SP38 carries the same 3.9-litre turbocharged engine as the 488 GTB, and performance figures have remain unchanged by the new body, meaning 661bhp and a top speed of 205mph. The running gear and chassis have also been kept the same as the 488.

The exterior design however has been drastically changed from the 488 GTB, with Ferrari claiming inspiration from the legendary F40 – in particular at the rear end. The glass engine cover morphs into a slatted cover across the engine bay for additional cooling. The back end also boasts a small spoiler, which is another nod to the F40. 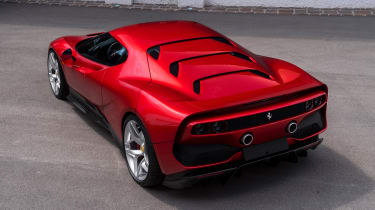 A new, sharper front end gives way to muscular wheel arches, creating a more aggressive stance. The headlights are designed to be as thin as possible and are joined by daytime running lights on the slim bumper lip.

The front bumper is designed to be reminiscent of the Ferrari 308 GTB, and the SP38 is finished in a new, three-layer metallic red paintjob.

Ferrari claims that a new tailor-made cabin is found inside, but hasn’t issued any pictures of the SP38’s cockpit.

The Ferrari One-Off programme’s SP38 follows an exclusive line of rare models, thanks in large part to the Special Projects division, which was launched back in 2007. Previous creations include the Ferrari SP12 EC, built for Eric Clapton, and the Ferrari 458 MM Speciale. Prices for the Special Projects are kept private between Ferrari and each customer, although speculation sees cars valued between £2 and £8 million.

The SP38 will be on public display at the Concorso d’Eleganza Villa d’Este on Saturday 26th May 2018.

Check out the best performance cars currently on the market…

The Ferrari Purosangue will be the Italian firm’s first SUV, with V6, V8 or V12 engines possible
New 2020 Ferrari Roma blasts in as new 612bhp GT