Prices for the convertible version of Ferrari’s hardcore 710bhp 488 Pista have been announced, starting at £278,850 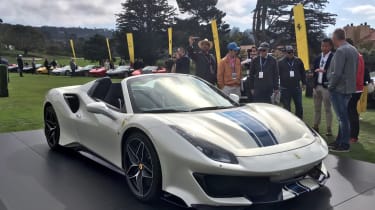 Ferrari has announced pricing information and a full specification for the 488 Pista Spider. The range-topping hardcore convertible starts from £278,850, although every model due for production has already found an owner, with only a limited number being built before Ferrari discontinues the 488 and begins construction of the recently-announced F8 Tributo.

Like the hard-top 488 Pista, the Spider gets a tuned version of Ferrari’s 3.9-litre twin-turbocharged V8, producing 710bhp and 770Nm of torque. It feeds its power to the rear wheels via a seven-speed dual-clutch gearbox, allowing a claimed a 0–62mph sprint of 2.85 seconds, a 0–124mph time of eight seconds and a top speed of 211mph.

With a kerb weight of 1,380kg, the 488 Pista Spider is 100kg heavier than the coupe, thanks mainly to its metal folding hardtop mechanism. Despite this, it still enjoys a 50kg weight advantage over the standard 488 GTB coupe, thanks to its carbon fibre body panels, Inconel exhaust, titanium con-rods and lightened crankshaft and flywheel.

Aerodynamic improvements from the 488 Pista coupe have also been employed for the Spider, with relocated engine intakes, a revised undertray, active aerodynamic vanes for the front and rear bumpers, rearwards-canted radiators and an F1-inspired ‘S-Duct’ for the bonnet, designed to channel air over the car and boost downforce.

The Pista Spider’s options list makes for interesting reading. Extras include two-tone paint (for £6,720), a racing stripe (priced at £8,640), leather upholstery (£3,840) and an uprated stereo system (£5,472). For those with deep enough pockets, Ferrari also offers one-piece carbon fibre wheels that give a 20% reduction in weight over the standard alloys.