New front-engined Ferrari 812 Superfast gets 20bhp more than F12tdf, and a top speed in excess of 211mph 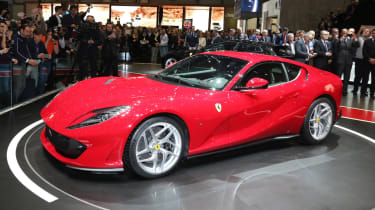 Ferrari has revealed its fastest-ever naturally aspirated sports car at the 2017 Geneva Motor Show, the 211mph 812 Superfast. It's the replacement for the F12berlinetta, and under the bonnet it gets a 6.5-litre V12 producing 789bhp. That's 20bhp more than the F12tdf and means the Superfast matches the LaFerrari hypercar without its hybrid assistance. The V12 needs some revs because maximum power is achieved at 8,500rpm, while the maximum torque of 718Nm is recorded at 7,000rpm. Like the F12, power is sent to the rear wheels via a dual-clutch transmission.

In terms of performance, the 812 Superfast is on a par with the limited-run F12tdf, managing 0-62mph in 2.9 seconds, with top speed touted as in excess of 211mph. Compared to the standard F12, it’s a tenth quicker from 0-62mph. 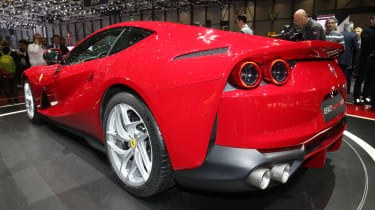 As well as more power, the 812 Superfast debuts Ferrari's new electronic power steering setup, so steering feel could be quite different to the hydraulic assistance of the F12. A revised version of the four-wheel-steering system seen on the F12tdf is also added. Known as Virtual Short Wheelbase 2.0, Ferrari claims that the revised system improves the agility of the handling in corners without sacrificing high-speed stability.

The 812 Superfast has a respectable 1,525kg kerbweight without fluids and with ‘lightweight’ optional extras selected. The car’s looks are a clear evolution of past V12 front-engined coupes – the long bonnet hides the V12, while the fastback rear end and floating aerodynamic buttresses are design cues that have appeared on models since the 599 GTB.

The 812 Superfast's look is inspired in part by the 1969 365 GTB/4 ‘Daytona’ – especially the car’s rear end, where four traditional round tail-lights are found. Four exhausts and a painted rear diffuser sit below the rear apron. 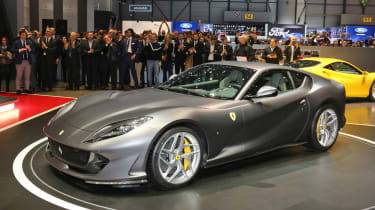 Down the car’s flanks, buckling cutaways down the doors feed into the wide front and rear arches, while at the front full LED headlights and sculpted air intakes give the 812 an aggressive face. Active aerodynamic flaps are found under the bodywork, which removes the need for additional spoilers and wings bolted to the bodywork.

• All the latest from the Geneva Motor Show

In the cabin the cockpit gets a sportier look. New ‘floating’ interior elements are paired with new sports seats and the latest Ferrari infotainment setup. No prices have been confirmed, but it should advance a little on the £240,000 price tag of the F12 it replaces.

What do you think of the Ferrari 812 Superfast? Let us know in the comments below!