The Fiat Fullback and Mitsubishi L200 pick-up trucks have a lot in common, but which one edges ahead as our class favourite? 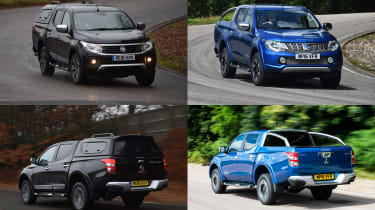 Pick-up trucks have been a big hit with British buyers. Their preferential tax rates mean they’re attractive to business users who also use their work vehicle for private use, while a fixed rate of road tax means they’ve been tempting for private buyers, too.

So it’s no surprise that more manufacturers are dipping into this lucrative sector. Renault and Mercedes both have pick-up trucks on the way, while Fiat has already launched the Fullback that we’re testing here.

The newcomer will look familiar to pick-up aficionados, because it’s essentially the Mitsubishi L200 with different badges. As that model is our current favourite in the pick-up truck class, it makes sense to put the two side by side to see how the Fullback compares. 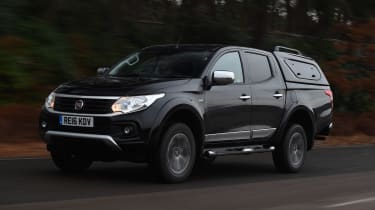 Fiat hasn’t been shy when it comes to using other manufacturer’s resources to help expand its range. It’s part of the FCA (Fiat Chrysler Automobiles) Group, so it shares technology with sister brands Alfa Romeo, Jeep and Chrysler. Beyond that, the 124 Spider is a Mazda MX-5 with a Fiat engine and different styling, while the firm’s panel vans share parts with PSA Peugeot-Citroen, Vauxhall/Opel and Renault models, depending on which size van you’re looking at.

So it should come as no surprise that Fiat turned to another manufacturer when it wanted to add a pick-up to its Fiat Professional commercial vehicle range. And what better choice than the Mitsubishi L200? While some of Fiat’s collaborations are a bit more involved than a simple rebadge and spec change, the Fullback is a pretty basic rebrand. There’s a new grille and headlights, although their basic shape is the same as the L200’s, so there’s no need for different body panels to make them fit.

The nose is less imposing than the Mitsubishi’s thanks to the lack of brightwork. Apart from that and a set of diamond-cut alloy wheels on top-spec LX models, the Fullback looks the same as the L200. Both models are built on the same production line in Thailand – where the L200 has been built for over 20 years – so quality should be matched. 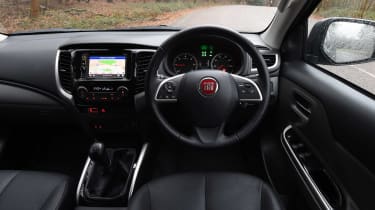 Performance is largely identical, too, although wet test conditions for the Fullback meant it took longer to come to a halt than the Mitsubishi. Four-wheel-drive traction helped it to match the L200 from 0-60mph, in 10.1 seconds, although as in its rival, the six-speed manual doesn’t like to be rushed with its changes, and a smooth and steady approach produces more satisfactory results. The Fullback’s handling is also a match for the L200’s, so it’s better suited to cruising.

Both models have more off-road ability than most buyers will need, and a rotary controller on the dash selects between modes. Rear-wheel drive will be fine for most occasions, while permanent 4WD and centre diff lock improve traction. Low-range gears with a diff lock offer excellent off-road ability, and with a maximum approach angle of 30 degrees, a 24-degree breakover angle and 45-degree side approach angle, only the very toughest of terrain will stop the Fullback.

However, the L200 manages exactly the same figures, and the differences between these two largely boil down to minor spec differences and which firm is offering the best deal. If you’re looking at both trucks, then the clincher could even be which firm has the closest dealership. 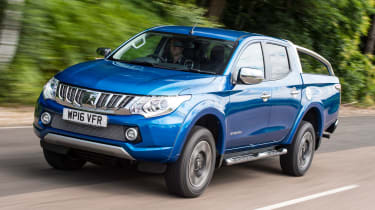 This version of the Mitsubishi L200 is called the Series 5, but it’s only the third generation of the pick-up that has been a hit with UK buyers. The Series 3 was the first L200 to go the full off-roader route, with a combination of rugged looks, a useful pick-up bed and genuine 4x4 ability that meant it was a popular choice with buyers.

The Series 4 featured curves inspired by Mitsubishi’s Dakar Rally-winning Pajero, and the current car is an evolution of that. Most pick-ups look fairly utilitarian, but the L200 carries a bit of style. The curvy body is dominated by the big chrome grille up front, while blistered wheelarches and a small window area give it a chunky look.

Unlike the Fullback, the L200 comes in a variety of body styles. There are the utilitarian Standard Cab and Club Cab variants in basic 4Life trim that are designed for pure commercial use, while the Double Cab range comes in more luxurious specs further up the range. Under the skin, and whichever version of L200 you go for, it gets a traditional off-roader set up – a ladder-frame chassis with the body bolted on top. There’s wishbone suspension up front, and at the rear is a live axle with leaf springs, so it’s designed for load carrying over passenger comfort. 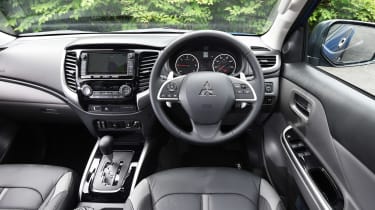 Selectable four-wheel drive is offered, which can be switched between rear or all-wheel drive, while a diff lock and low-range gears help off-road. In standard 4WD mode the power is split 40:60 front to rear to help reduce understeer, although if you’re driving on the road in normal conditions, you’ll probably be in 2WD mode most of the time.

The L200 rides well, and only at speed and when unladen does the suspension get flustered by uneven surfaces. On the whole, it drives like a big SUV, so while it rolls a bit in corners, there’s decent grip. The engine gets harsh when extended, but strong mid-range torque means you don’t need to rev it to make brisk progress.

The cabin is reasonably quiet, but material quality won’t quite be up to the expectations of SUV buyers. The L200 is still primarily a commercial vehicle, so while leather is standard on Barbarian models, it’s designed to be easy to wipe cleanrather than plush, and the cabin plastics are hard.

Sat-nav is standard, although it does look like an aftermarket system. There’s also a reversing camera, dual-zone climate control, auto lights and wipers, xenon lights and keyless entry. There’s not much to separate our duo here when it comes to running costs, but the Mitsubishi offers slightly more standard kit for your cash. 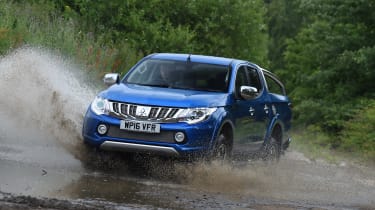 Mitsubishi still builds the best pick-up truck on sale in the UK. With its reasonably refined road manners, long list of kit and tough dependability, it gets the pick-up formula just right. Add in the standard five-year warranty and a slightly lower asking price for a model with similar kit, and it just edges the Fullback. 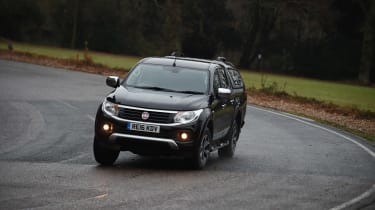 For a first effort, the Fullback is a fantastic double cab pick-up that could also pass as Fiat’s first large SUV. However, its brilliance is entirely down to the L200 that hides behind those Fiat badges. The smaller model range will limit its appeal to business users, while the three-year warranty is short.