If you needed proof that Fiat is confident about its new Panda 4x4, then how about this? The company drove one to a mountaineering base camp at Mount Everest, 5,200 metres above sea level with no proper roads. 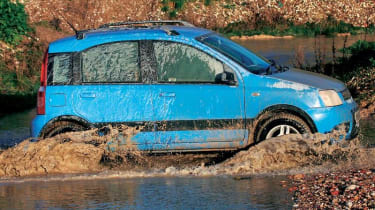 There's no doubt the Panda 4x4 will sell on its tougher styling. But there's a price to pay in terms of refinement, and the performance can be frustrating at times. If Fiat was to consider a cheaper two-wheel-drive version for city buyers wanting the looks, but not the off-road ability, then it could have a real hit on its hands.

If you needed proof that Fiat is confident about its new Panda 4x4, then how about this? The company drove one to a mountaineering base camp at Mount Everest, 5,200 metres above sea level with no proper roads.

Of course, few British motorists will ever undertake such a massive challenge in the rugged new baby. But even here in the UK, the car's performance in the rough is no less impressive.

The successor to the original Panda 4x4 of the Eighties, the new machine delivers off-road ability wrapped up in a chunkily styled city car package. With an automatic 4x4 system, it is front-wheel drive in normal use - but when the going gets tough, up to 50 per cent of the drive is sent to the rear wheels.

There are no locking differentials, as you would find on a full-sized SUV, and no low-range transfer box, either. However, Fiat is still keen to point out that the Panda offers one of the cheapest entries to the new off-roader market.

Backing up the 4WD is suspension that's raised by 50mm all-round, with the rear getting a new independent set-up. There are also specially designed tyres and additional underbody protection.

The practical interior is identical to that fitted to the standard Panda. And although it would be nice to have seen a set of revised trim levels and off-road extras such as wipe-clean surfaces, the cabin is still an excellent piece of work, offering more space and comfort than you would expect from a small car.

Performance, however, is less dramatic. Power comes from Fiat's eight-valve, 1.2-litre, 60bhp petrol engine. The 1.3-litre Multijet diesel - which would seem a more obvious choice for the 4x4 with its greater torque - is sadly unlikely to be offered in the UK.

As impressive as the Panda 4x4 is in the rough, there's a trade-off on tarmac. The ride is far bouncier than that of the regular model, and body roll is more pronounced in corners, too. Here, you'll feel the four-wheel-drive system helping you out, with the Panda gripping well even on greasy winter roads. There's also an increase in cabin noise, with a boomy resonance as a result of the mud-plugging suspension and tyres.

Inside, the din proves loud enough to drown out even the hard-worked engine, which feels slightly overwhelmed by the 4x4's 100kg increase in weight. The powerplant needs pushing to perform. As a result, the car takes a sluggish 20 seconds to reach 62mph from a standstill, while maintaining motorway speeds requires forward planning.

The engine's lack of torque sees the Panda struggle on inclines, forcing you to drop through the gears. This isn't so noticeable around town, though, where the car feels brisk enough to keep up with the urban crawl. In fact, it's when tackling city roads that the Panda 4x4 makes the most sense.

While the newcomer doesn't stand quite as tall as most conventional off-road models, its additional height is still commanding enough to allow drivers to see over most traffic. The chunkier bumpers and side body mouldings will shrug off parking knocks, and the Fiat will take even the steepest of speed humps in its stride.

UK buyers will be offered only one model, in a stand-alone trim. Costing £9,195, the car comes with ABS and EBD, remote central locking, driver and passenger airbags, a CD player and electric front windows. Standard alloy wheels, black roofbars and foglights complete the off-road look.

Fiat expects about 1,000 sales a year here, which given the lack of direct rivals is a reasonable goal. But while the Panda 4x4 looks great and represents excellent value for money, real off-road enthusiasts should look elsewhere.