We try three nippy, value for money runabouts from Ford, Kia and Fiat for size... 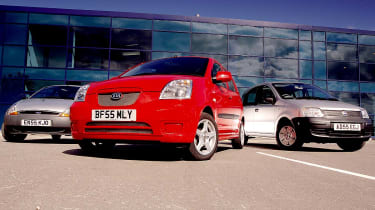 Times have never been tougher for city cars. To hit the top of the class, newcomers need to be as good at keeping up with motorway traffic as they are at squeezing into tiny parking spaces.

Around £5,000 is enough to buy a late example of the current crop, which we’ve brought together in this special head-to-head test.

While the original Mini started the ball rolling for small cars back in 1959, it was the Ford Ka which reminded a new generation in the mid-Nineties that low-cost motoring could also be fun. Fiat, the king of small car makers, came up with its answer to the Ka in 2004 in the shape of the Panda. And it scored an immediate hit by offering five doors instead of three.

Kia’s Picanto arrived soon after, with a winning blend of affordability and practicality. Here, we look at all three to prove that budget cars don’t have to mean basic motoring when you’re buying second-hand.

The Ka’s mechanicals come from the Fiesta, but the looks are much more striking. In fact, the styling is so good it has barely changed in a decade of production. A driver’s airbag is fitted as standard on all models, but power-steering was initially an option on entry-level cars, so it’s worth checking early examples to make sure they have this desirable extra.

Only one engine was available at launch, a 1.3-litre unit, which was arguably the car’s weakest point. But in May 2003 the SportKa arrived with a larger 94bhp 1.6-litre unit and even sharper styling and handling.

Choose a post-2002 Ka, and you’ll get the facelifted version. Changes to the outside were minimal, but there was a revised 1.3-litre engine and many models got stylish colour-coded bumpers. Strong annual sales for Ford’s baby ensure there’s plenty of choice, so you can pick up an early Ka1 from as little as £750. You’ll have to pay more for a Panda, though, as it only burst on to the scene two years ago.

It made an immediate impact, being crowned 2004 European Car of the Year, and is available with either a 54bhp 1.1-litre or 60bhp 1.2-litre petrol engine. Go for a nearly new model, and you’ll also be able to choose the cracking 70bhp 1.3-litre Multijet diesel.

Our test trio was supplied by car supermarket Motor­point in Derby. Log on to www.motorpoint.co.uk to see what it currently has on offer.

VERDICT 1st Picanto (£4,000-£7,000) The cute Korean won the Best Small Car category in Auto Express’ 2006 Used Car Honours – and it’s clear to see why. The Picanto has a surprising amount of equipment and is one of Britain’s cheapest cars to run. These reasons alone make it a great buy – but factor in stylish looks, a spacious interior and 55mpg economy, and you’ve a micro-sized masterpiece.

2nd Ford Ka (£750-£9,500) Yes, it’s now 10 years old, but from behind the wheel, the Ka is still a class-leading drive. The 1.3-litre engine is a disappointment, there’s only one three-door bodystyle and no diesel or automatic gearbox option, but if you’re on a budget the Ford is hard to beat. The cramped rear means it won’t suit everyone, but the handling is guaranteed to put a smile on your face.

3rd Fiat Panda (£3,750-£7,500) The roomy Panda is a smart, modern-day interpretation of Fiat’s original compact runabout, the 500. The basic 1.1-litre model is a letdown, and isn’t available with air-conditioning, but otherwise, the Panda is a spacious, grown-up little car that is comfortable and refined beyond expectations. While 1.2-litre models are dearer, they are the best buys.

Ford Ka If you need more than three doors, the Ka is a non-starter. Space in the rear is tight and the boot is small, although split-folding seats are standard. The driving position is good, despite the lack of wheel adjustment. Original trim levels were designated ‘1’, ‘2’ and ‘3’, but the well equipped Collection is the one to go for. Running costs are low, thanks to 10,000-mile service intervals and cheap parts. Rust can be a problem, particularly around the sills, and the body lacks rubbing strips, so look out for dings on the doors.

From behind the wheel, the sharp steering and handling mean the Ka is a revelation in corners, offering plenty in the way of fun. It may be cheap, but the Ford is a driver’s dream, and the ride quality is also first-rate.

It’s reasonably economical, but the 1.3-litre unit can trace its roots back to the ancient Ford Anglia! Performance isn’t great and tappet noise is common. A lack of regular maintenance can cause problems.

Fiat Panda A five-door body makes the Panda the roomiest here, and top-of-the-range Eleganza trim offers big-car features such as climate control and sat-nav. Active models are the entry-level cars, while Dynamic trim has three optional ‘value’ packs. Twin front airbags, central locking and electric windows are standard, as is power-steering with an easy to use ‘city’ mode. Service intervals are 12,000 miles and running costs are low. How­ever, the three-star Euro NCAP crash safety rating is the same as the older Ka’s.

The Panda is much bigger inside than it looks, and a high-set driving position and MPV-like dash add to that impression. The console-mounted gearlever is excellent to use.

Air-con and roof bars aren’t available on the 1.1-litre Panda, while many early versions lack ABS and split-folding rear seats. The unique-fit stereo often lacks a CD player on base models, too.

Kia Picanto The five-door Picanto offers a split-fold rear seat and space for five. There are three trims (GS, LX and SE), with the latter two equipped with air-con and electric windows as standard. The 1.1-litre model has an optional auto, while all-round disc brakes with ABS are standard on all cars. Service intervals are 10,000 miles, while the three-year warranty has no distance limit, but most used Picantos have covered very low mileages. Owners report no major concerns, but there have been minor quibbles with the gearbox and clutch.

Smart styling outside is matched by a decent interior with plenty of space. And equipment levels are superb, with all cars featuring a CD player, central locking and twin front airbags fitted as standard.

The fiddly aftermarket stereo looks shabby compared to the Panda’s integrated unit. The dash is screwed together well, but the indicator stalk mounted on the right-hand side of the column is very irritating.