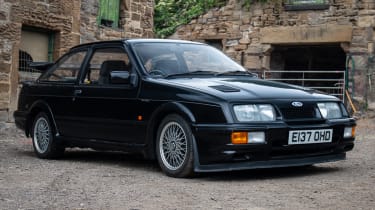 Demand for classic fast Fords continues to climb, with a Sierra RS500 Cosworth set to appear in next month’s Silverstone Classic Sale carrying an estimate of £105,000.

Manufactured in 1987, the car is number 38 of 500 Sierra RS500 Cosworths built, and is on the open market for the first time since 1988 having done just 10,840 miles since new. The Ford homologation special has been used sparingly and comes with a well documented history, including service receipts, previous MOTs and SORN notices.

Back when it was launched in 1982, the distinctively shaped Ford Sierra did not have the best of starts. To help boost the fortunes of the standard car, Ford decided on an obvious remedy - motorsport. It needed to build 5,000 Sierra Cosworth units for motorsport homologation, and 500 RS500 road car derivatives were subsequently created to make it eligible for Group A International Touring Car racing. 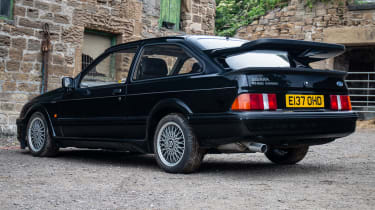 Aston Martin was drafted in to convert the 500 right-hand drive cars, and power was boosted to 224bhp with potential for it to exceed 400bhp in full race spec. Elsewhere, there were many aerodynamic enhancements, plus larger cooling ducts for both the brakes and the engine intercooler.

Initially all 500 RS500s were intended to be finished in black, however 56 cars were painted white and another 52 were produced in blue. The car at the Silverstone Classic Sale is of the most common black variety.

The Silverstone Classic Sale takes place on 21 and 22 July.

Could this Ferrari 250 GTO become the most expensive car ever sold at auction?