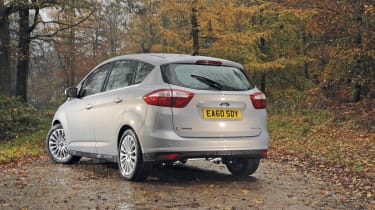 From the chiselled exterior styling and bold new cabin design to the terrific on-road abilities, the C-MAX is a class act. The 150bhp 1.6 EcoBoost version and the 113bhp 1.6 TDCi driven here cost the same – giving  drivers the option of performance or economy. The revised interior is more practical than ever, and with the seven-seater Grand C-MAX also on sale, it should prove to be a popular choice for families of all shapes and sizes.

The C-MAX is on a roll! Ford’s family-friendly model made a big impression on us in Issue 1,133, but that car was equipped with the powerful EcoBoost petrol engine. Now, we’ve driven the mid-range diesel – expected to be the biggest seller – to find out if it cuts the mustard on British roads.
The new car is handsomely proportioned, echoing the shape of its bigger brother, the S-MAX, but with the grille and headlights from the next Focus. Its design is a direct result of the company’s One Ford global strategy, which is intended to make models blend seamlessly into different markets.

Video: watch CarBuyer's video review of the Ford C-MAX
[[{"type":"media","view_mode":"content_narrow","fid":"69291","attributes":{"alt":"","class":"media-image"}}]]
Step inside and the new dashboard layout is superb. Clearly, a lot of work has gone into making the C-MAX look and feel like a premium product.
All the materials are soft to the touch, build quality is superb and major controls such as the chunky steering wheel and polished gearlever are really well designed. It sets a new benchmark for this type of car, and rivals will have to up their game if they want to stay competitive.
To justify the price premium over a standard hatch (prices start at £1,550 above the current Focus), the C-MAX is an exceptionally versatile package – even the smaller five-seat model. The rear seats, for example, split 40/20/40, fold flat or can be removed entirely, leaving a cavernous 1,723 litres of space.
Passengers are treated to generous amounts of head and legroom, although the narrow middle seat is more for occasional use than long trips. What’s more, it can be folded away, allowing the remaining seats to slide backwards and inwards to create a roomy 2+2.
Despite this added practicality, it’s on the move that the C-MAX truly comes to life. The 1.6-litre diesel may only have 113bhp, but power delivery is smooth and linear, there’s plenty of torque and refinement is class-leading.
It’s incredibly hushed, even at higher revs, and wind and tyre noise are equally well suppressed. Combine this with the supple ride – which doesn’t jar occupants, even over the largest bumps and potholes – and the C-MAX is a supremely talented cruiser.
Driver enjoyment is still high on the agenda, though, and thanks to a chassis shared with the forthcoming Focus, it corners with the agility of a much smaller car. The steering is quick and direct, providing lots of feedback, and thanks to the short-throw six-speed gearbox, there’s a surprising amount of fun to be had if you choose to push on.
The only real issue is the price. At £19,745 for the Titanium model driven here, Ford’s latest people carrier is more expensive than most rivals, while some features you’d normally expect as standard aren’t included on the equipment list – powered mirrors and parking aids being prime examples. Still, the C-MAX is a cut above the competition, and anyone who takes a test drive will be quickly convinced that it’s worth the extra outlay.
Share this on TwitterShare this on FacebookEmail