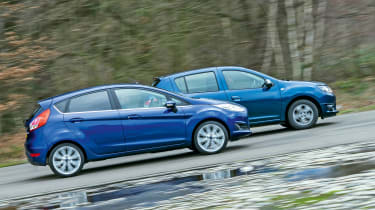 For years, the Dacia Sandero has held the crown as Britain’s cheapest new car. However, don’t be put off by the bargain-basement price, as there’s plenty to like here as well as great value.

You might have to make some concessions when it comes to comfort, as the Sandero is based on parent company Renault’s Mk2 Clio that can trace its roots back to the nineties. However, there’s a good level of standard kit in the Laureate model we’ve picked. In fact, with cruise control and air-conditioning – plus the option to upgrade to a seven-inch satellite-navigation screen with Bluetooth for £300 – it’s an affordable package with plenty of practicality. 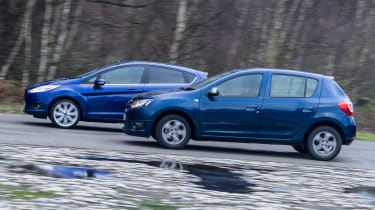 It’s here where the Sandero has a slight advantage over its used Fiesta rival. It might not boast the Ford’s sharp styling, but the boxy shape means there’s plenty of room inside. With seating for four adults – and five for short journeys – the Dacia feels surprisingly mature given its junior price tag.

There’s also a large boot, with 320 litres of luggage space on offer. Not only is this bigger than the Fiesta’s 290-litre load bay, it eclipses the much larger Focus family hatch from the class above, which serves up 316 litres. However, the small Ford still has enough space for day-to-day life, and it’s only on longer journeys loaded up with passengers and luggage where the Sandero’s extra practicality comes into its own. 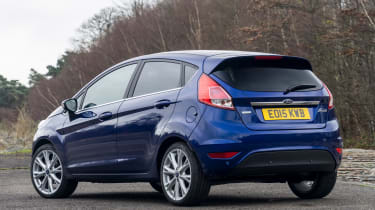 If you’re looking for shoestring motoring, then the Sandero is a new car best buy – but there is another way. For around the price of the Dacia, you can have your pick of five-door Fiestas with Ford’s award-winning 1.0-litre three-cylinder petrol turbo in high-spec Titanium guise. This means there’s enough kit to match the Sandero’s at similar money.

• The cheapest cars on sale

While the Fiesta might lack some practicality next to the Dacia, it’s much more stylish and great fun to drive, with an agile chassis and sweet steering. For a standard supermini to deliver this kind of enjoyment from behind the wheel is impressive, and even with a few thousand miles on the clock the Fiesta is a solid car, so it should still offer good road manners. If the example you’re looking at doesn’t, the choice on the market is huge – so walk away and find another. 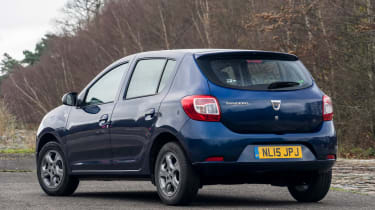 The engine is more eager than the Dacia’s, with an extra 34bhp to play with and even more mid-range torque, plus there’s better fuel economy and CO2 emissions despite the extra performance.

The Sandero might be Britain’s cheapest car, but for years the Fiesta has been the country’s best seller – and for good reason. So if you want a second-hand supermini with bags of character, the Ford fits the bill.