Crossovers: Which rugged family car is a better buy, the BMW X3 or the Honda CR-V? 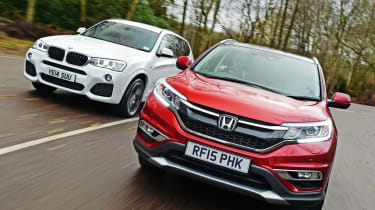 There aren’t many areas where Honda and BMW’s product ranges overlap, but this new vs used battle is one of them. For the price of the former’s top-spec CR-V auto, you could also buy a used X3 in popular M Sport trim with the company’s fabulous 2.0-litre diesel and eight-speed automatic box.

As with most BMWs, the X3 delivers excellent performance, with 187bhp to play with, an xDrive four-wheel-drive transmission for extra traction in slippery conditions, and a smooth auto gearbox that offers effortless cruising ability. 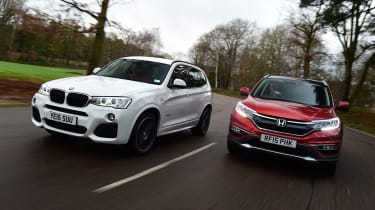 In addition to all this, because it’s based on the manufacturer’s 3 Series saloon the X3 is also great to drive. You can throw it into bends with surprising aggression and the car clings on. Optional adaptive dampers cut down on body roll in Sport mode, while the chassis clearly telegraphs exactly what’s going on between the tyres and the road.

It’s refined, too. Drop those dampers into Comfort mode and the high-riding SUV settles down to a relaxed cruise, soaking up bumps nicely even on the standard 18-inch M Sport alloys thanks to the long-travel suspension. The four-cylinder turbodiesel is quiet and the cabin comfortable – and with a 550-litre boot, plus a 60:40 split-folding rear seat, there’s plenty of practicality on offer. 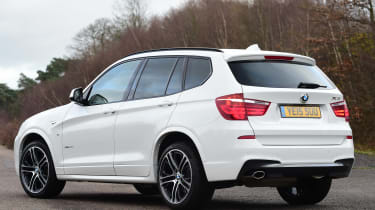 However, the Honda is ahead when it comes to usability. A cavernous 589-litre boot means it’ll cope with whatever a family can throw at it, and in EX spec it’s also well equipped. Sat-nav, Bluetooth, DAB, parking sensors, a reversing camera, heated leather seats and cruise control all come as standard.

But BMW’s iDrive multimedia system is much easier to navigate than Honda’s laggy, low-resolution touchscreen, and although there’s plenty of kit, the CR-V’s interior layout and material quality aren’t up to scratch compared to the X3’s slick, leather-lined cabin. 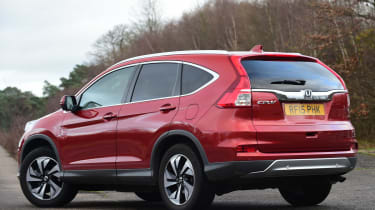 Also, a lot of soft-touch plastics give BMW’s marginally cheaper used SUV more of a premium feel compared to the Honda, while the more tactile surfaces contribute towards its relaxing air.

The CR-V’s nine-speed transmission isn’t quite as slick as BMW’s automatic, either, and the gearshifts aren’t as fast. But they are smooth, and with short ratios it means the downsized 158bhp 1.6-litre pulls harder than its capacity suggests.

It’s still no match for the BMW, though, as the X3’s mix of off-roader looks, a luxurious interior, superior efficiency, practicality and – if you buy used – fair price is a winning combination here.