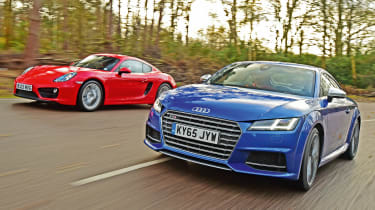 The latest Audi TT is the best version yet. Combining cutting-edge styling with genuine thrills and one of the best cabins around, this classy coupe is crammed full of ‘must have’ appeal. This is particularly true of the flagship TTS, which boasts a powerful 296bhp 2.0-litre turbo that’s hooked up to the brand’s quattro all-wheel-drive transmission. But is it a better bet than the sublime Cayman S?

With its howling, naturally aspirated, flat-six motor, perfectly balanced mid-engined layout and immersive driving experience, the Porsche still sets the sports car standard. A new Cayman S will set you back at least £50,000, but delve into the classifieds and you’ll find plenty of lightly used two-year-old models for around £40,000, which is almost exactly the same amount of cash as a new TTS.

When it comes to visual impact, first blood goes to the Audi. This third-generation TT is arguably the most distinctive and dynamic yet, thanks in no small part to its eye-catching blend of soft curves and sharp creases. TTS models add head-turning LED lights, 19-inch alloys and purposeful quad-exit exhausts. 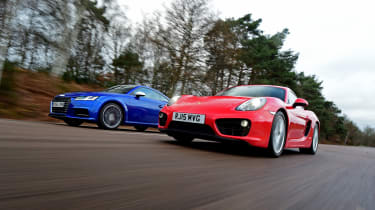 By comparison, the Porsche looks a little low-key. The car in our pictures is an entry-level Cayman, but apart from the single centre-exit exhaust it’s visually identical to the S. With its low-slung stance, air vents cut into the back wings and retractable rear spoiler, the Porsche isn’t short of sporty design cues; it just doesn’t have the drama of the bold TT.

A similar theme continues inside, where the Cayman lacks the Audi’s ‘wow factor’. The Porsche’s low-set driving position and five-dial layout put the driver at the centre of the action, while the build quality and materials are both first-rate. Yet it all feels a little sombre compared to the daringly styled TT’s interior.

As with the Porsche, the Audi’s fit and finish are straight out of the top drawer, but this feeling of solidity is matched to some real design flair. One highlight is the clever Virtual Cockpit set-up. This replaces the traditional dials with a 12.3-inch TFT screen, allowing you to fully customise your display. 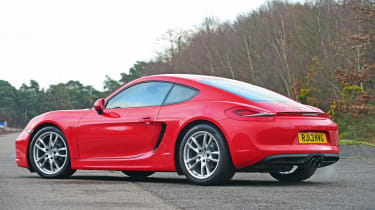 Of course, these attention-grabbing coupes need the substance to match their style – and it’s here the Porsche turns the tables on the TT. From the moment the Cayman’s flat-six bursts noisily into life, you know you’re in for a treat. Search out a car with a sports exhaust and you’ll be treated to a spine-tingling howl as the 3.4-litre unit races towards the red line. The low-rev performance isn’t as strong as the Audi’s, but once the engine climbs past 4,000rpm the car really flies.

Yet it’s the Porsche’s performance in corners that really stands out. The steering isn’t as fast as the Audi’s, but its deliciously spot-on and dripping with feedback. There’s also limpet-like grip, excellent body control and sublime balance – you can subtly alter the car’s line using the throttle alone. Other highlights include the precise, short-throw gearchange and powerful, progressive brakes. Optional adaptive dampers give a comfortable ride, too.

The Audi gets configurable suspension settings as standard, but it’s not enough to give it the edge here when it comes to driver satisfaction. That said, the current TTS is one of the most entertaining Audis of recent years. Underpinned by the brand’s light and strong MQB platform, the coupe feels remarkably light on its feet. Quick steering, a positive turn-in and strong composure inspire confidence, while the combination of four-wheel-drive traction and turbocharged torque allows the car to fire out of corners with a ferocity the Cayman can’t match. 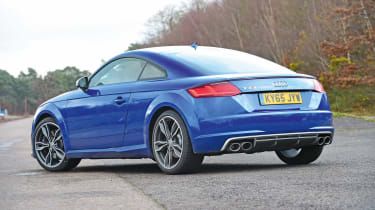 And while the Audi’s 2.0-litre four-cylinder unit can’t match the Porsche’s for noise and drama, it’s a brutally effective performer, launching the TTS from 0-62mph in only 4.9 seconds (4.6 for cars with the S tronic twin-clutch box). Not only is the TT a stronger performer, it’s a little more practical, too. There’s a decent 305-litre load bay under the rear hatch, while the back seats are perfect for small children, or adults on short journeys. The Porsche, meanwhile, is a strict two-seater. It benefits from a 275-litre boot at the rear and a further 150 litres of space in the nose.

Neither car can be run on a shoestring, but the Audi boasts lower CO2 emissions and stronger economy, plus parts and servicing will be cheaper. It also gets more standard kit. Yet in the final reckoning the Porsche’s poise, noise and involving driving dynamics are worth the extra outlay. The TT is stylish, fast and composed, but it simply doesn’t feel as special and engaging as the bewitching Cayman.