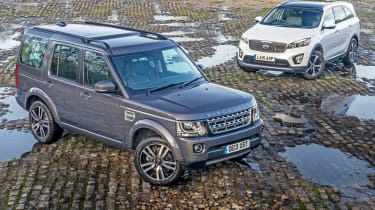 When Kia launched its latest, third-generation Sorento seven-seater last year, it made a big step upmarket, combining the SUV’s traditional spacious interior with higher-quality materials than ever before and plenty of big-car kit. The model is still affordable, but prices have risen with this newcomer – and that puts the Sorento right in the firing line of one of the best in the business: Land Rover.

• Best seven-seat cars on the market

Our pick of the Sorento range is the £37,600 KX-3 auto, which we’re running on the Auto Express test fleet. The Sorento received a well earned commendation in the Large SUV category at our 2015 New Car Awards for its rugged image and fresh injection of style, but there are other 4x4s out there that offer the same. For similar money, you could buy a lightly used Discovery 3.0 SDV6 in HSE spec with around 15,000 miles on the clock. 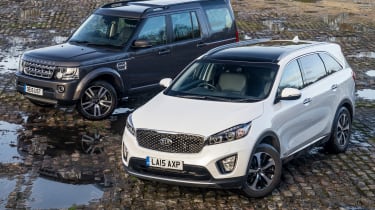 Big family SUVs such as these need to be practical, and here the Land Rover scores well. It has a bigger boot in seven, five and two-seat configurations, offering 172, 1,260 and 2,558 litres of luggage space respectively. The Kia manages 142, 605 and 1,662 litres, and our experience shows that this is still more than enough day-to-day, while the Sorento counters the Land Rover’s cavernous load bay with strong practicality elsewhere. For example, the rear seat folding mechanism is much simpler on the Kia, while there’s plenty of passenger room. But it’s the KX-3’s equipment that really impresses at this price.

This model is the sweet spot of the line-up, with a seven-inch touchscreen infotainment system featuring sat-nav, Bluetooth and DAB, heated leather seats in the front and middle rows, climate and cruise control, classy 18-inch alloys and even self-levelling suspension and Trailer Stability Assist all fitted as standard. So, although the Discovery won our 2015 Tow Car of the Year award, the Kia will still prove effortless if you’re pulling a trailer.

There’s an all-new Discovery due next year, but this current model has been refined and honed to the point where it’s now a consummate all-rounder. The Land Rover has more power and torque from its 252bhp 3.0-litre turbodiesel V6 engine than the Kia, and delivers super-smooth performance, taking 8.8 seconds to cover the 0-60mph sprint and offering creamy refinement. 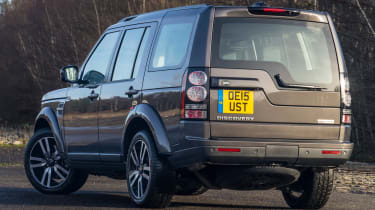 The Kia’s smaller, less powerful 197bhp 2.2-litre four-cylinder diesel clatters more when you rev it, and provides less pace, completing the 0-60mph dash in 9.6 seconds. Yet the unit still serves up enough mid-range shove, while the automatic box swaps cogs smoothly. The advantage of the Sorento’s smaller engine is it’s more efficient. Whereas the Discovery claims 36.7mpg and 203g/km of CO2, the Kia improves on that with 42.2mpg and 177g/km. With enough performance for most situations, if running costs are a priority the Sorento edges ahead.

On the road, both cars ride with composure, with the all-round air-suspension on the Discovery HSE doing a great job of smoothing out the road surface and cushioning you from lumps and bumps. It’s effortless on long journeys, but the Sorento’s ride is composed, too. Kia has made large strides with quality inside, and that’s also mirrored with how this new model rides and drives.

The suspension has a soft edge that cushions the car, and even in the third row, sat right over the rear wheels, the Kia is comfortable. There’s not much to split these cars when it comes to room in the third row, as there’s plenty of space in both for children, as well as adult passengers on shorter journeys. 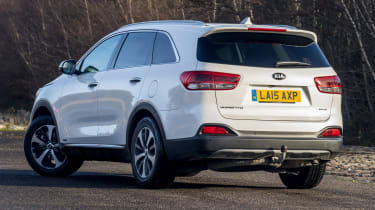 Both feature four-wheel drive as standard, too, so there’s also a good level of off-road performance to call on. However, while the Kia will cope with a muddy field, if you’ll be covering more testing terrain the Land Rover’s extra ability is obvious. But despite their rugged looks these cars will likely spend more time on the road, and with the kit and efficiency on offer, a brand new Sorento is an enticing proposition – because the Kia also has a joker to play.

The brand’s standard seven-year warranty is a big draw, when used Land Rovers at this price are rapidly approaching the end of their manufacturer cover. Nevertheless, a nearly new Discovery for Kia levels of cash is tempting, especially when the Korean badge still might not carry quite as much prestige as Land Rover. But make no mistake, this new Sorento is a premium product at still-affordable prices – which is why it just edges the Land Rover here.