The Volvo XC90 is the 2015 Auto Express Large SUV of the Year, with the Kia Sorento and Range Rover Sport commended 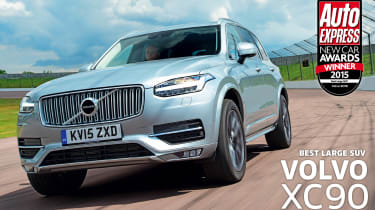 Volvo has shaken up the large SUV class with a premium seven-seat off-roader that offers superb luxury and cutting-edge tech at more affordable prices. After winning our Design Award last year, the firm is going through a purple patch when it comes to styling, and the XC90 is a crisp and clear evolution of Volvo’s vision.

Cool details such as the Thor’s Hammer daytime running lights and the bluff but bold front end mean this SUV is setting the latest design trends. Inside, it’s a similar story, as the minimalist cabin is beautifully trimmed.

The XC90 is undeniably a top-quality product, and the dash-mounted iPad-style tablet that controls the multimedia, climate control and sat-nav systems is the icing on the cake. 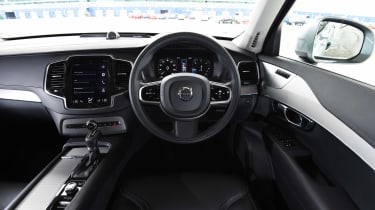 The engine line-up ensures that there’s substance to go with the style. There’s one 222bhp diesel – which is smooth, refined and perfectly adequate – a 316bhp petrol and a 401bhp petrol hybrid with a great turn of pace.

Practicality is paramount for a large 4x4, and the Volvo combines plenty of room for seven with lots of comfort. It’s versatile, too, as each chair in the middle row slides independently, while the folding mechanism is simple. Plus, the extra two seats fold flat for a huge 1,102-litre boot.

Then there’s the next-generation safety kit. Volvo is known for pioneering new innovations, and with clever tech to help avoid a crash and keep you safe, the XC90 is one of the most advanced cars when it comes to protection.

In all areas the Volvo excels, making it one of the most desirable cars on sale. 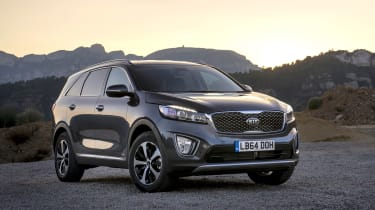 Building on its rugged image, the new Sorento adds a new sense of style to the mix. It still boasts impressive four-wheel- drive ability, but with decent efficiency from its new diesel engines and an upmarket styling makeover inside and out, Kia’s seven-seat off-roader is threatening the premium brands with its new-found luxury and versatility. 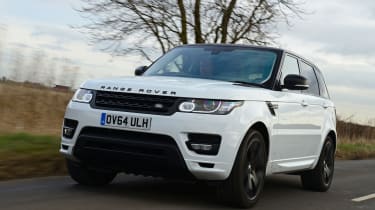 Price might hold the Range Rover Sport back in this company, but a sumptuous cabin and a serene ride, thanks to standard-fit air-suspension, mean it’s still a brilliant SUV. That suspension gives incredible off-road ability, but the Sport is also surprisingly capable in corners. A useful seven-seat layout is offered as an option, too.