The Skoda Superb is the 2015 Auto Express Family Car of the Year, with the Mazda 6 and Volkswagen Passat commended 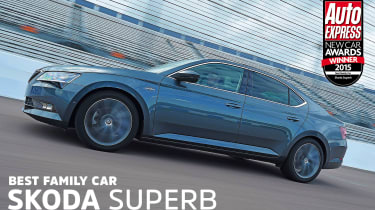 Skoda’s charge upmarket continues with the new Superb, and the result is just that. This is the marque’s most stylish, refined car ever, and its combination of great design, quality and – importantly – price puts it ahead of its closest rival, the Volkswagen Passat.

Imposing angular looks replace the previous Superb’s curvier styling, and the cabin feels much slicker, with kit you’d expect from cars costing twice as much.

But those talents are more than simply skin deep, as with a range of powerful and efficient diesels – teamed with a relaxing, refined chassis – it’s hushed on the move and can rival many luxury cars for comfort.  There’s a choice of petrol engines as well, but the 148bhp 2.0 TDI is the pick, with plenty of torque and strong efficiency for a car this big. It’ll cruise in cut-price luxury, but it’s agile too, because it’s up to 75kg lighter than before. 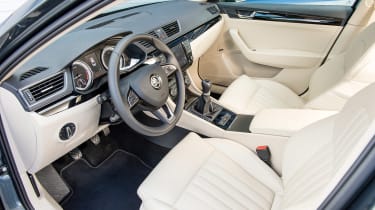 It’s even bigger inside, though, and serves up limo-like comfort and an impressive ride. As well as keeping the old car’s vast amount of rear legroom, there’s also now even more headroom. The ‘twindoor’ split tailgate has been dropped in favour of a huge hatch opening that reveals a 625-litre boot – and if you want more space but as much grace, an estate will be along later this year.

With its dazzling quality and incredible flexibility, plus aggressive pricing that undercuts rivals by some margin, the Superb’s grip on the family class will be tough to break.

Superb 2.0 TDI SE Business (£22,090) WITH loads of equipment, a punchy engine and a vast interior, the Superb SE Business is great value and costs £3,150 less than the equivalent Volkswagen Passat. Business users and private buyers alike will love the striking design and frugal running costs. 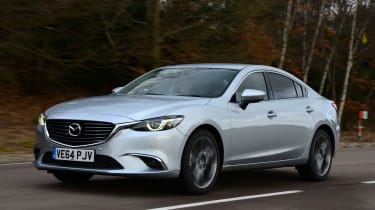 Last year’s winner is as good as ever thanks to a mid-life refresh that tweaked the exterior design and moved the cabin upmarket. Gone is the chunky dashboard, and in its place is a sleeker facia with even more tech and improved material quality. Yet the fun driving dynamics and low running costs remain. 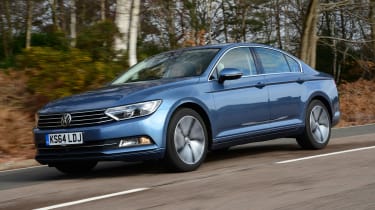 Now in its eighth generation, the Passat is more luxurious than ever. Based on the company’s versatile MQB platform, withVW’s typically solid build quality, it’s agile and enjoyable to drive, but cosseting and efficient when cruising. A 586-litre boot and plenty of equipment mean it covers all bases.