The Ford Fiesta is 40 years old! We see how the new car compares to its six predecessors 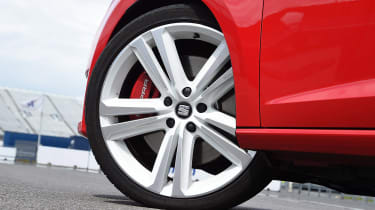 A 40th birthday party is normally a pretty big affair, so it’s no surprise to find Ford has pulled out all the stops to celebrate four decades of its Fiesta supermini. In fact, it has gone as far as to launch an all-new version, which promises to set new standards for refinement, technology and upmarket appeal, while retaining the old car’s value and sparkling driving dynamics.

We’ve got into the party spirit by bringing the newcomer face-to-face with its illustrious ancestors. In November, we headed to Ford’s Go Further event to get under the skin of the exciting new supermini, before hitting the road in the models that have become some of the most popular buys in Britain.

• Ford Fiesta at 40 - we celebrate the UK's best-selling car

Many of Britain’s drivers took their first motoring steps in a Fiesta, while the wide variety of models means there’s a version for every taste and budget – from a frugal family runaround to a hairy-chested hot hatch.

So all you have to do is click through the links below or at the top left of this page to see our epic 40 year-spanning Fiesta road test!

Fast Fiestas: a race through time

Ford first toyed with the idea of a faster Fiesta in the late seventies, when it entered a pair of Group 2 Fiesta rally cars into selected events for future world champion Ari Vatanen and British legend Roger Clark.

This led to 1980’s 1.3-litre Supersport, which was followed a year later by the XR2 – and the latter became an instant hit with its distinctive round headlamps, racy bodykit, ‘pepperpot’ alloys, stiffened suspension and 84bhp 1.6-litre engine. 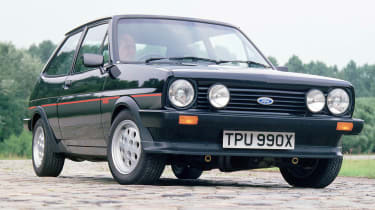 As a result, Ford didn’t mess with the winning formula for the Mk2. The original engine was replaced by a more powerful 96bhp 1.6-litre CVH unit and the interior got a more upmarket look, but in all other respects the XR2 ignored sophistication and outright performance for fun and value.

The brand was more ambitious with the third-generation model. The addition of fuel injection meant a healthy 110bhp output – and a name change to XR2i – while a fresh front bumper with extra lights, plus blue piped trim, set the car apart. Ford also offered the hot RS Turbo, with 132bhp and 0-62mph in 8.2 seconds. Late in the Mk3’s life, both cars got the new 1.8-litre 16-valve twin-cam Zeta units, giving 104bhp in the XR2i and 128bhp in the renamed RS1800. 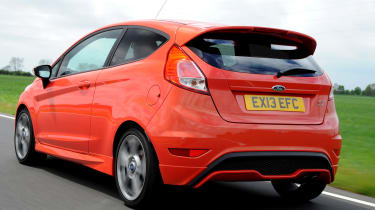 Thefts and rising insurance premiums meant that the hottest Mk4 Fiesta was the 101bhp Zetec-S, although suspension and steering tweaks from the Puma coupé made it great fun to drive. The 148bhp ST arrived with the Mk5 in 2004 and was a step in the right direction, but not until 2013’s current ST did Ford get its fast Fiesta mojo back.

The Fiesta ST is viewed by many company insiders to be the best fast Ford since the legendary nineties Escort RS Cosworth, and combines thrills with value.