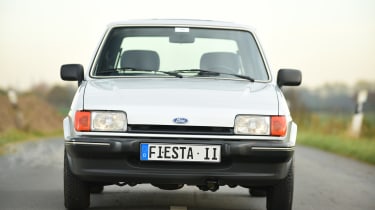 Compared with the Mk1, Ford’s replacement wasn’t quite as revolutionary. It was more a mild facelift than a redesign, but when the second-generation Fiesta launched in 1983 it still brought some advanced features.

Wraparound headlights were the big design change – they added a more modern look and significantly improved aerodynamics – while the engine bay was enlarged to accommodate a new five-speed gearbox. This was a big step, and despite being based on the same platform, the Mk2 felt much more modern to drive, helped by the new transmission’s extra refinement.

Another big change was the introduction of a diesel for the first time – and in various forms the 1.6-litre was a fixture of the Fiesta line-up for nearly two decades. At the other end of the performance spectrum, the 96bhp XR2 boasted the same big thrills and small bills template as its predecessor.

Inside, the Mk2 felt more modern than its predecessor, thanks to the softer design and more upmarket trim. However, this Fiesta did feature a strange cabin quirk in the form of two completely different dashboard designs: one for entry-level models and another for more expensive versions such as the Ghia and XR2. Despite this unusual arrangement, the Fiesta continued to top the sales charts until an all-new model landed in 1989.

Fiesta fact: Aerodynamic body gave the Mk2 a more modern look than the original, while addition of a five-speed box and diesel engine option kept the car competitive against ever increasing number of supermini rivals. Ford’s CTX continuously variable transmission was also offered on 1.1-litre cars.