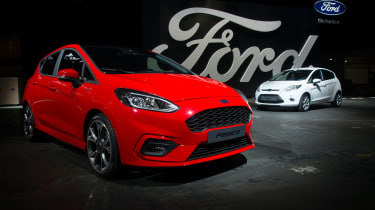 The all-new Ford Fiesta has some pretty big boots to fill. There have been six generations of the car in its four decades on sale, and its illustrious predecessors have topped the UK best seller lists for years, becoming an almost permanent fixture on UK roads. The pressure is on for the newcomer to maintain this rich vein of form. So how does it stack up?

We’ll have to wait until next year before we can get behind the wheel of the new version and deliver our definitive verdict, but on initial impressions the likes of the VW Polo and Vauxhall Corsa should be worried.

Taking its cues from the larger Focus, the Fiesta is longer and wider than before, which helps give it a more grown-up and mature look. This impression is enhanced by the less fussy surfacing of the body panels and a switch to horizontal rear lamps. As before, Ford will offer buyers a choice of three or five-door versions.

However, the biggest changes have been reserved for the interior, which has come on leaps and bounds in terms of quality, layout and tech. For starters, the fussy infotainment system has been ditched in favour of a slick-looking tablet-style set-up that uses Ford’s latest SYNC 3 system. The rest of the dashboard has been given an equally radical makeover, and the mix of high-quality materials, understated style and solid finish means the interior should match the Polo’s for premium appeal.

There will be plenty of choice and a few new model variants, too, as the popular Zetec and Titanium versions will be joined by the recently introduced ST-Line trim and an upmarket Vignale. Ford has also pulled the covers off the tough-looking Fiesta Active crossover, which gets rugged black plastic body cladding and a raised ride height.

Under the bonnet of the newcomer will be the familiar line-up of turbocharged 1.0-litre three-cylinder EcoBoost petrols, plus Ford will introduce a new naturally aspirated 1.1-litre version of this engine. Also making an appearance is the latest 1.5-litre TDCi diesel, which will be available with a number of power outputs.

Keen drivers will be keen to hear that beneath all the new metal, the car remains closely related to the model it replaces. This means it should still set the standard for fun handling and supple ride quality.

Either way, the new Fiesta promises to be one of the most exciting new cars of 2017.