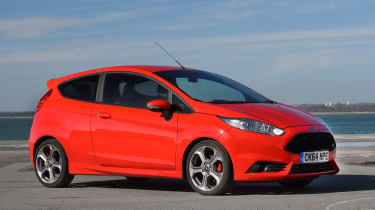 Ford has consistently shown that mainstream needn’t mean ordinary, and the Fiesta ST proves the point. The brand was overwhelmed with orders as soon as it went on sale, and it’s easy to see why. Affordable, practical, sharply designed and more fun than many cars costing several times the price, the ST brought fun to the masses. Its desirability keeps residuals strong, but while you’ll need at least £10k, there are plenty to choose from; a third of all European sales have been in the UK. As with any performance car, you need to check a potential purchase hasn’t been abused, but buy a cherished one and you’ll have fun on tap for as long as you want it.

Ford is no stranger to budget performance cars; its XR and RS brands are rightfully revered by driving enthusiasts. While the manufacturer’s most extreme showroom models continue to wear RS badges, the ST brand has picked up where XR left off; we first saw it on the Focus ST of 2002, and since then we’ve had one desirable ST model after another.

Most accessible of the lot is the Fiesta ST, which offers all of the usual Fiesta brilliance but with added verve. Indeed, the ST is our favourite small hot hatch, due to its lively handling and scintillating performance. Even better is that while the baby sportster provides grin-inducing motoring, you don’t need deep pockets to buy or run one. 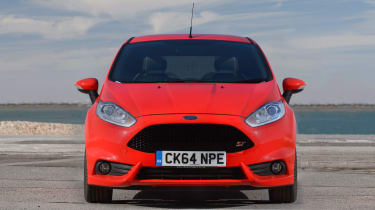 The original Fiesta ST arrived in November 2004 with a normally aspirated 2.0-litre petrol engine. Nearly seven years later, Ford revealed a thinly disguised concept of a new ST based on the all-new (seventh-generation) Fiesta. When the Mk7 ST was launched in spring 2012 it was fitted with a 1.6-litre turbo. At first there were ST-1 and ST-2 derivatives, but by spring 2013 there was also an ST-3. As with the cheaper editions, this came in three-door form only.

All STs use a 180bhp engine, but in June 2016 the hottest Fiesta ever was launched: the three-door-only, special-edition 197bhp ST200. The final revision to the range came in October 2016, when the ST-2 and ST-3 could be ordered with five doors.

The ST-1, ST-2 and ST-3 are all mechanically identical, with a six-speed manual gearbox. There are two options for extra performance: the ST200 or a Mountune upgrade. The latter is offered by dealers, and boosts power to as much as 227bhp. 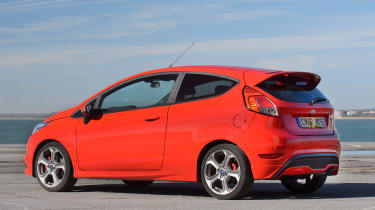 Alternatives to the Ford Fiesta ST

As with the Fiesta, the Renault Clio RS200 has a 1.6-litre turbo. However, whereas the Fiesta is manual only, the Renault just has a disappointing dual-clutch auto. The Suzuki Swift Sport gives reliable fun on a budget and it’s superb value, too, although its normally aspirated 1.6 lacks the ST’s performance.

A closer match is the Peugeot 208 GTi, with its 197bhp 1.6 turbo; its chassis trails the Fiesta’s but with prices from less than £9k, you don’t need deep pockets to buy one. The Audi S1 is also worth a look, but its prices are higher. And while the build quality is superb, the drive isn’t as invigorating as the Fiesta’s.

Door seals can come away from the frame, leading to wind noise at speed as well as water leaks into the Fiesta’s  cabin. Fitting new seals is the answer. 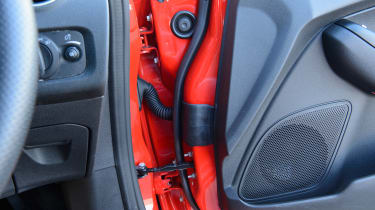 The three-door configuration means thick rear pillars, so three-quarter visibility to the back isn’t very good. Scraped bumpers are far from uncommon.

Windscreen washers can stop working when the under bonnet hose gets trapped within the bonnet hinge, preventing the washer fluid from flowing.

Fuel filler flaps can stick shut, making refuelling somewhat difficult. Greasing the seal is one cure, as is cutting back one of the plastic lugs on the retaining clip.

In regular form the Fiesta’s cabin is stylish, if rather busy. Most STs have three doors only, so rear access is compromised thanks to the chunky (but very comfortable) front sports seats. Once in there space isn’t especially tight; boot capacity is good too, at 290 litres, or 274 litres with a space-saver spare wheel. 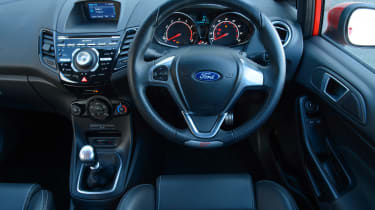 All Fiesta STs need to be serviced every 12 months or 12,500 miles. The first four visits cost £189, £199, £249 and £199 respectively, but once a car reaches its third birthday it can be maintained on the Motorcraft scheme, which cuts the cost of each service to a mere £149. However, this programme also reduces the amount of new parts that can be fitted, which is why sticking with the full schedule is recommended.

The brake fluid should be changed every two years at £40-£50, and fresh coolant is required every 10 years, at £70. Expect to pay £50 every three years to refresh the air-conditioning, while every decade or 125,000 miles the cambelt needs to be replaced, at a cost of £319. 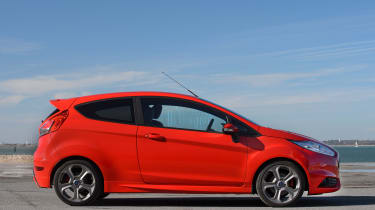 The Fiesta Mk7 has been the subject of eight recalls so far, which equates to less than one a year since it was introduced. Three of those were aimed at diesels specifically; the other five were for Fiestas as a whole, but some involved only a small number of cars.

A seatbelt-anchoring problem affected just 15 Fiestas, while a mere 69 were involved in a detached-axle recall. Larger numbers were caught up in campaigns because of exhaust fumes entering the cabin, failed rear suspension mounting bolts and issues with back seatbelt buckles.

We don’t separate out the ST from other derivatives in Driver Power, but the Fiesta as a whole came 105th in the 2016 survey. The highest rating was for handling (an impressive 18th), while running costs and performance came in at 76th. Lowest score was for build quality, at 135th – disappointing.