The all-new Ford Fiesta has arrived, but what's it like on the road? We find out in our first drive review

Despite its age the old Ford Fiesta was still a formidable force in the supermini class, so by addressing all that car’s weaknesses Ford has delivered a car that’s in strong contention for class honours. The biggest improvements revolve around the cabin, which now boasts genuine premium appeal and all the technology and connectivity you’ll need. It’s also roomier than before and, crucially for a family car, safer. The fact that it’s as good to drive as ever is the icing on the cake.

We’ve seen it on the motorshow stands and been up close and personal during static photo shoots, but after months of waiting we’re finally going to get behind the wheel of one of the most eagerly awaited cars of 2017 - the all-new Ford Fiesta.

The newcomer certainly has some big shoes to fill because, even after eight years on sale, its predecessor still had a firm hold on the top of the sales charts, plus it continues to set the class standard for driving fun.

However, Ford bosses are acutely aware that upmarket models such as the VW Polo and new SEAT Ibiza have edged well ahead of the Ford when it comes to quality, refinement and infotainment - features that supermini buyers are increasingly placing at the top of their shopping lists. 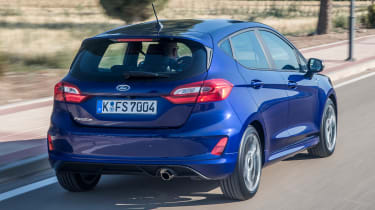 So in an effort to maintain its place at the cutting edge of this cutthroat class, Ford has left no stone unturned in pursuit of small car success. Now in its eighth generation, the Fiesta has been treated to a welcome dose of upmarket appeal, a raft of hi-tech additions and a much-needed boost in practicality.

There’s also the addition of high-riding Active version and a luxurious Vignale flagship, plus the familiar Zetec and Titanium guises. However, it’s the popular five-door ST-Line trim we sample here, with the most powerful 138bhp version of the familiar 1.0-litre three-cylinder EcoBoost petrol - the same unit is also offered in 99bhp and 123bhp states of tune. Later in the year sees the arrival of a new naturally aspirated 1.1-litre triple, while diesel fans have the option of a 118bhp 1.5-litre TDCi. Finally, there will be an all-new 197bhp three-cylinder 1.5-litre turbocharged petrol for the scorching ST.

At a glance, the new Ford Fiesta looks very similar to its predecessor (which is no surprise given its based on the same Global B platform), with the familiar trapezoidal grille, swept back headlamps and rising waistline. The biggest departure is at the rear, where the larger, horizontal tail lights help give the Fiesta a more grown-up look.

ST Line models get an extra dose of kerb appeal, however, courtesy of a bespoke bodykit that comprises deeper front bumpers, side skirts and a tailgate spoiler. Yet look past the familiar lines and you’ll notice the Ford is a fraction bigger than before. Not only is the Ford 71mm longer and 12mm wider, there’s an extra 4mm in the wheelbase; all of which adds up to a useful increase in cabin space. 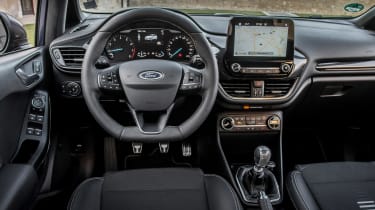 Climb aboard, however, and it’s not the extra room that you’ll notice first. While the exterior is a subtle evolution of the old car’s, the interior is something of a revolution. Gone are the cheap feeling plastics, scatter gun ergonomics and blocky, monochromatic screens, to be replaced by something far more modern that’s packed with premium appeal.

The first thing you’ll spot is the large, tablet-style touchscreen that sits on top of the classy looking dashboard. Our car boasted £300 sat-nav upgrade with eight-inch display (a 6.5-inch unit is standard), but all models from the Zetec up get Ford’s SYNC3 software as standard. This features crisp graphics and slick smartphone integration thanks to its handy AppLink set-up, which bundles in Apple Car Play and Android Auto.

Our car was also fitted with a powerful sounding £300 Bang & Olufsen 10 speaker sound system. Elsewhere the Ford impresses with its soft touch materials and solid construction - it’s not quite up to the VW’s high standards, with some harder plastics lower down in the cabin, but it’s very close. 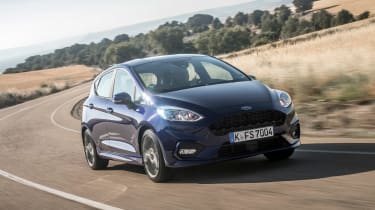 As before, there’s a decent amount of seat and wheel adjustment, which in combination with the perfectly placed pedals and gearlever results in an excellent driving position - few superminis place the driver so squarely at the centre of the action.

Thumb the starter button of this Titanium model and the three-cylinder EcoBoost fires unobtrusively into life. Ford has worked hard on refinement, with improved soundproofing in the body and revised suspension bushes. As a result there’s less road roar on the move, while the engine is more muted for more of the time. Work the 1.0-litre hard and there’s some characteristic three-cylinder thrum when extended, but it now matches the class leaders for quietness.

This calmness in the cabin is matched by the Fiesta’s sophisticated ride, which felt supple and composed on the admittedly well surfaced Spanish roads of the launch. Yet even the occasional broken and torn stretch of tarmac failed to knock the smooth riding Fiesta off its stride. This is particularly impressive when you consider ST-Line models feature a 10mm lower ride and stiffer springs and dampers.

Fortunately, this more mature feel doesn’t come at the expense of the car’s focus on engaging driving dynamics; if anything, the Ford handles with more agility than ever. This is down to a combination of wider track (30mm at the front and 10mm at the rear), a slicker steering system and the adoption of a similar torque vectoring set-up to the larger Focus.

Turn into a corner and you can feel the reduction in resistance through the steering, which is lighter than before but delivers just enough feedback. There’s bags of front end grip and the nimble Fiesta locks onto your chosen line even when carrying plenty of speed through a corner. And excellent body control means that even mid corner bumps and rapid changes of direction fail to upset the Ford’s rock solid composure. Yet there’s a playful side to the Fiesta, meaning you can subtly tweak the car’s balance through a bend with combination of steering and throttle. 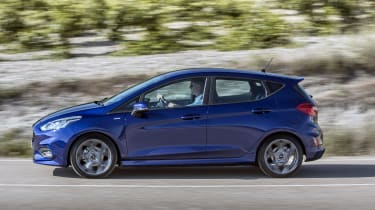 The sense of fun is enhanced by the engine, which with 138bhp and 180Nm delivers decent performance and characterful growl when worked hard. Better still, all versions of this engine get a six-speed gearbox for the first time. Not only does the extra ratio unlock a little extra performance - Ford claims 9.0 seconds for the 0-62mph sprint - the quick and precise shift action encourages you to swap gears just for the hell of it.

However, drive with more restraint and the Ford is as easy to drive and live with as ever. The major controls are light and progressive, making urban excursions a doddle, while visibility is good, apart from the small rear window and thick C-Pillars - parking sensors and a rear-view camera can be added for £250.

Just as importantly, the Fiesta is more family friendly than ever, with the stretch in wheelbase freeing up an extra 16mm of legroom in the rear. As a result, it’s now a match for models such as the Polo and Ibiza, if not the spacious Nissan Micra. Lifting the tailgate reveals a fractionally larger 292-litre boot but a wider opening for easier access. 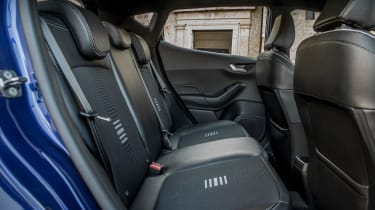 Then there are the advanced new safety systems that are a must for any car aimed at family motorists. Emergency Assistance and lane keep assist are standard, while the options list features big car kit such as cross traffic alert (£475) and adaptive cruise control with autonomous braking (£200-£500 depending on model).

Yet while the Fiesta has the refinement and technolgy and even space to rival larger cars, it should still cost buttons to run. For instance, our 138bhp EcoBoost promises 62.8mpg at the pumps and emits just 102g/km of CO2, making it an attractive choice for business users. You can expect low servicing and insurance costs too.

So it’s triumphant return to the top for the Fiesta, then? The short answer is yes, but there is a caveat. In standard guise the ST-Line 140 EcoBoost will set you back a hefty £17,595, while our heavily option test car was closer to £20,000. However, it’s worth bearing in mind the fact that the entry-level Zetec with the 98bhp version of this engine promises to deliver the same quality, kit, driving dynamics and refinement for a far more reasonable £15,445, while Ford’s keen PCP deals mean you won’t pay much extra a month to step up to the desirable ST-Line.