Can’t wait for the RS? Here’s a hot alternative. 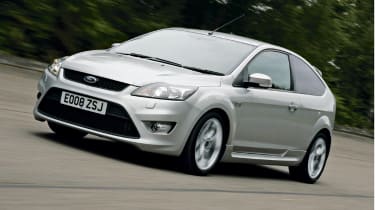 If the wild rally-replica looks of the Focus RS don’t appeal, this tuned ST could be the way to go. Mountune’s tweaks result in devastating in-gear pace, but the chassis and suspension are more than capable of coping. There’s no waiting list for the work, either, making the Mountune ST an attractive alternative to the RS.

WHEN Ford revealed the Focus RS hot hatch at the British Motor Show in July, it soon had a queue of eager customers ready to place a deposit. Indeed, the firm has confirmed that 1,000 orders have already been taken for the newcomer, even though the RS won’t arrive in showrooms until early next year.

However, if you can’t wait for the 296bhp flagship to arrive, Ford could have a solution for you. The company has hired the services of Essex-based firm Mountune to provide a power upgrade for the current hot Focus, the ST. What’s more, the tweaks don’t affect the three-year manufacturer warranty.

The revisions include a new proAlloy intercooler and free-breathing K&N air filter, while the car’s on-board computer has been remapped to improve throttle response. As a result, the power increases from 222bhp to a healthy 256bhp, while torque rises from 320Nm to a whopping 400Nm from as low as 2,500rpm.

This extra thrust means that the benchmark 0-60mph sprint is covered in 5.9 seconds, an improvement of six-tenths of a second, while the 0-100mph time drops by nearly two seconds to 14.1.

On the road, the changes to the ST are obvious as soon as you floor the throttle. The car’s distinctive five-cylinder warble is now accompanied by a turbo whistle, while the Focus’s in-gear acceleration is simply astonishing as the engine races to its 6,500rpm red line.

Mountune is currently working on a stiffer suspension package for the ST, but the stock set-up copes well with the extra power. The standard car’s sharp turn-in and pliant ride remain intact, and the Focus is as docile as ever when you’re taking it easy.

The upgrades are priced at £1,120, excluding fitting. Added to the £18,545 price of the entry-level ST, it results in a car that offers RS-rivalling performance at a fraction of the price.