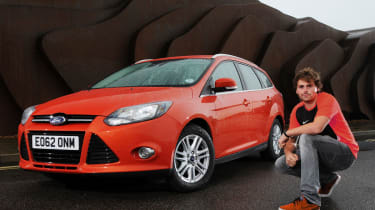 Downsizing is all the rage for car manufacturers these days. Whether it’s launching smaller models to fill new niches, or reducing the overall emissions of their ranges, makers leave no stone unturned.

One big area of change is under the bonnet. In 2012, you don’t have to go for a 2.0-litre turbo for big power, because a smaller 1.6-litre model can be just as potent. And it’s able to achieve this while also delivering respectable fuel economy.

So how small does an engine have to be before it’s too small? Well, Ford is pushing the envelope with its new turbocharged 1.0-litre three-cylinder EcoBoost petrol. The engine has already won awards for its innovation, but what’s it like to live with on a daily basis?

It’s my job to find out, as I’ve been handed the keys to our Ford Focus Estate, which is powered by the new engine. I do plenty of miles every year heading to airports and photo locations across the country – so we’ll soon be able to find out whether this piece of downsizing really does work.

On first impressions, the three-cylinder is amazing. It comes in two power outputs, and our higher-spec 123bhp version has more than enough grunt to get me and a bootful of camera gear up to speed on the motorway. There’s plenty of mid-range torque to cope with overtaking, and while you’d expect such a small engine to feel strained, there’s not a lot of fuss from under the bonnet.

Most of the time hardly any noise is audible from the engine, and it’s only when you get near the red line that you can hear the characteristic offbeat three-cylinder thrum – but even then it’s not unpleasant. The quiet, unruffled character of the engine goes hand-in-hand with the high-quality interior. Build quality is excellent, and the hi-tech options fitted to our car are very user-friendly. There’s a lot of buttons on the centre console and steering wheel, but once you’re used to them it’s pretty easy to find your way around.

Passenger space inside is superb, especially in the back, while there are plenty of handy cubbyholes in which to store my odds and ends. We slated the tiny boot of the Focus hatchback we used to run, yet you can’t level the same criticism at the estate version. There’s 476 litres of space for all my camera equipment, and while the boot isn’t as big as those of some competitors, the flat floor and square shape mean it’s easy enough to load up with stuff.

If you need even more room, the seatbacks fold with a simple pull of a lever; again, you’re presented with a completely flat floor, although you need to flip up the seatbases first.

As I’ve said, lugging that bootful of camera equipment doesn’t seem to have any drastic effect on the 1.0-litre’s pulling ability. Backing that up is the fuel economy – so far we’ve seen 35.7mpg from the Focus, which isn’t too bad considering that the load space is full for the majority of the time and the number of motorway miles I cover.

However, that’s still some way short of Ford’s official economy figure of 55.4mpg. We’ll have to wait and see whether we can get closer to that over the next 12 months. And unlike some of my colleagues, I really like the optional £525 Mars Red metallic paint. Admittedly it’s more orange than red, but that doesn’t distract from its eye-catching appeal. Better still, it makes the Focus easy to pick out in an airport car park…

“The Focus’ multifunction steering wheel is easy to use; its button positioning means you’re unlikely to press one by mistake when using full lock.”Dean Gibson, Deputy road test editor

“Ford should stick the 1.0-litre EcoBoost in the Fiesta as soon as possible – and tuning emissions to sub-100g/km would vastly increase the car’s appeal.”jamesmclaughlin, via www.autoexpress.co.uk