The new Focus ST earned its spot in our top 10 by winning one of the toughest hot hatch shoot-outs we’ve staged. 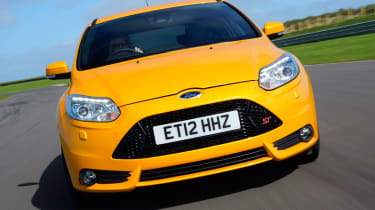 The new Focus ST earned its spot in our top 10 by winning one of the toughest hot hatch shoot-outs we’ve staged.

That battle took place on the iconic Route Napoleon in southern France, where the Ford saw off the brilliant VW Golf GTI and Renaultsport Megane 265 on the way to becoming our new class champion.

So how would it fare in this broader performance contest? Well, firstly the ST was never going to beat the time set by the bone-shaking Renault at Anglesey in our 2011 shoot-out – in fact, it trailed by over two seconds, recording a time of 67.5 seconds.

Yet the ST proves that great performance cars are about much more than just raw speed. The 2.0-litre turbo engine retains the same raucous soundtrack as its five-cylinder predecessor, and peak power of 247bhp arrives a full 1,500rpm before you hit the rev limiter, so it’s easy to keep the engine in the sweet spot.

The chassis offers a superb balance between traction and comfort, and unlike its rivals, the roomy five-door really is a car you could drive every day.

And if you do, you’re unlikely to tire of its engaging character. The steering and brakes are perfectly weighted, and the front-wheel-drive chassis is one of the most engaging we’ve driven.

Add in the superbly comfortable Recaro seats and boisterous exterior styling, and the Focus quickly started to climb our final running order.

With a starting price of just £21,995, this is one of the performance car bargains of the decade – and it would have finished even higher were it not for the brilliance of our top two.

Drive the Focus ST, and it’s hard to believe it starts at £21,995. This is a true blue-collar supercar. And while replicating the old ST’s distinctive five-cylinder exhaust note was always going to be tough, Ford has created the best-sounding 2.0-litre turbo on sale.