Morgan has been building sports cars for well over a century now, but underneath the evocative thirties bodywork of the new Plus 8 roadster is some seriously modern hardware. 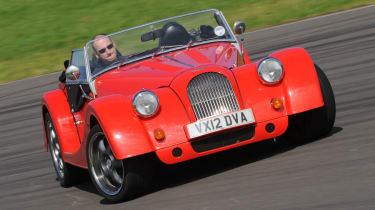 Morgan has been building sports cars for well over a century now, but underneath the evocative thirties bodywork of the new Plus 8 roadster is some seriously modern hardware.

The bonded and riveted aluminium chassis is from the madly styled Aero coupe, and means the Morgan weighs just 1,100kg, while beneath the long bonnet is a firebreathing BMW-sourced 4.8-litre V8 engine that produces nearly 370bhp. Factor in the optional sports exhaust system, and you’ve got an explosive recipe.

Prod the starter button and the engine thunders ferociously into life, although at normal road speeds the Plus 8 feels surprisingly docile. Grip from the cut slick tyres is tremendous and the six-speed automatic transmission allows the car to waft along as gently as the Mercedes SL63.

Stick the huge gearlever into manual mode and drop down to second, however, and the roar from the quad exhausts is truly deafening as the Morgan transforms itself into a truly visceral track car.

The heavy, numb steering means it’s difficult to place the Plus 8 with precision, and the rear end snaps into oversteer without much provocation. It’s addictive and terrifying at the same time – a feeling that’s only enhanced by the rattling windows and the tremendous heat soak from that enormous engine in the nose.

Driving this car with the roof down is an unforgettable experience, and it proved its blistering performance by matching the 64.3-second lap time set by the Audi RS4 at the Anglesey track.

Yet the Morgan is also deeply flawed – and its faults are hard to ignore given that it’s the same price as a new Porsche 911.

Climbing into the Morgan is like stepping back in time, and I really bonded with it after grabbing the keys to take it back to the Malvern factory once we’d finished at the track. Still, you would have to really love it to put up with some of its hand-built quirks. The flimsy roof leaked when it rained, and the dials didn’t light up at night so you can’t see how fast you’re going, That’s forgivable on a thirties classic, but not a new car costing £80,000.