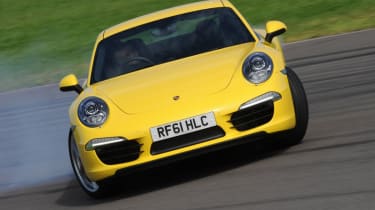 For nearly half a century, the classic Porsche 911 recipe has remained largely unchanged, with every single model featuring a rear-mounted flat-six engine, compact body and versatile 2+2 cabin.

Yet the arrival of a new 911 is always big news – and the latest version is no exception, especially in range-topping Carrera S guise. Faster and more powerful than ever, the all-new 911 is one of the most thrilling drivers’ cars money can buy.

As you would expect, it’s blisteringly quick. The 395bhp 3.8-litre engine delivers relentless acceleration, all the way from idle to the 7,500rpm red line. Better still, this searing straight-line pace is accompanied by a spine-tingling, hard-edged howl from the £1,772 sports exhaust, while the PDK gearbox delivers smooth and rapid shifts via steering wheel-mounted paddles.

Just like its predecessors, the 911’s rear-engined layout results in staggering traction, allowing you to slingshot out of corners with barely a hint of wheelspin. There’s also incredible front-end grip and rock-solid body control. The steering is beautifully weighted and full of feedback, and the brakes deliver eye-popping stopping power.

But it’s the Porsche’s ability to combine all of this with everyday usability that’s really impressive. Optional PASM adaptive dampers provide a supple ride, the cabin is comfy and well finished, and there’s even a decent-sized boot.

The only sticking point is the hefty £83,629 price tag and miserly list of standard kit.

There’s been a lot of rubbish written recently about the Porsche 911’s new electric power-steering system. If you believe what you read in some quarters, it lacks the feedback of the old car’s hydraulically assisted rack, robbing the 911 of its legendary intimacy. In reality, it’s near-perfect in its weighting, feel and response, so the Carrera’s character remains undiluted.